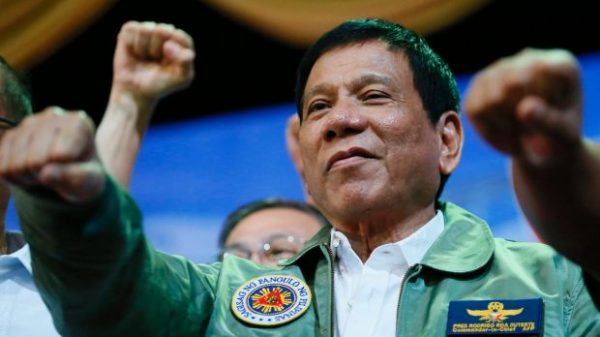 Manila: In his latest outburst Philippine president Rodrigo Duterte has told foreign investors they can leave his country if they don’t like his often obscenity-laden comments or deadly crackdown on drugs.

“So be it. Leave our country. Then we can start on our own. I can go to China. I can go to Russia. I have to talk with them. They are waiting for me, so what the hell?”
The comments came after international rating agency Standard and Poor’s warned that extrajudicial killings are threatening the Philippine economy and endangering its democratic institutions.

The comments came after international rating agency Standard and Poor’s warned that extrajudicial killings are threatening the Philippine economy and endangering its democratic institutions.

“Do not keep complaining about my mouth because my mouth is not the problem,” he said.

Standard and Poor’s maintained its stable outlook for the country that has had one of the strongest performing economies in Asia in recent years but warned the killings “could undermine respect for rule of law and human rights through the direct challenges it presents to the legitimacy of the judiciary, media and other democratic institutions”.

More than 3500 Filipinos have been killed in Mr Duterte’s crackdown on drugs that has been condemned by the Catholic Church, United Nations and United States, among others.

But his popularity remains high in his island nation of 100 million which has had one of Asia’s highest rates of drug use and crime.

After labelling US president Barack Obama the “son of a bitch” and telling the European Union “f— you,” Mr Duterte has now asked the United Nations and EU to come to the Philippines to debate him on human rights.

“I’m inviting the United Nations [secretary general] Ban ki…what’s the name of that devil again? Ban Ki-moon, Ban Ki-sun. I am inviting the EU. Send the best player of your town. Even the [UN] rapporteurs, come to the Philippines,” he said while opening a power plant on Mindanao.

But Mr Duterte said he would insist those who come would have to answer his own questions to them.

The former mayor of southern Davao city has shaken-up the Philippines’ system of government since winning May elections in a landslide on promises to wipe out drug use and crime within months.

Known as the “Punisher”, Mr Duterte on Thursday escalated personal attacks on one of his main critics, Senator Leila de Lima, saying she has a “propensity for sex” and has been “screwing” her driver and the nation.

Mr Duterte’s supporters in Parliament have accused her of taking money from drug lords while she was justice minister, which she denies.

Mr Duterte’s shoot-from-the-hip parochial style of diplomacy and a string of anti-American outbursts have jolted US allies in Asia.

The president is planning a trip to China amid tensions over Beijing’s aggressive claim to almost all the strategic and resource-rich waters of the South China Sea.

He told reporters he does not expect the US “to die for us so we just have to navigate our own way around here”, prompting speculation he is moving away from the old ally.

The US has been the Philippines’ closest military ally, with US forces regularly rotating through bases in the country.