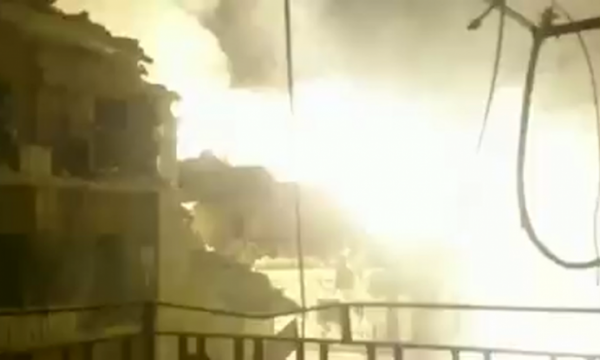 Footage of the devastating effect of incendiary munitions used by pro-Assad warplanes over eastern Aleppo has shown the use of white phosphorus in the city, activists have claimed.

Citizen journalists filming in the Bustan al-Qasr neighbourhood – dubbed the Passage of Death – where bright white light from the air strikes illuminated the night sky and set fires raging in the central district, said they believe they witnessed white phosphorus being used.

A second video filmed in rebel-held areas in Aleppo city and countryside on Wednesday night into Thursday, September 22 in Kafr Dael, a few kilometres west of Aleppo, showed the use of incendiary weapons from afar.

Bombing by pro-Assad warplanes, Syrian government and Russian aircraft, has intensified over Aleppo, Syria’s most populous city before the start of its civil war, in the past two days. The reinvigorated bombing campaign has coincided with the declaration of a new military offensive by the Syrian government.

Diplomatic efforts brokered by the US and Russia in New York have failed to salvage a ceasefire in Syria between combatants that lasted six days.

The UK-based Syria Observatory for Human Rights has said at least three people were killed in about 30 raids that began overnight.

Reuters reported that three of four of Aleppo centres for the Syrian Civil Defense service – more commonly known as the White Helmets – in rebel-held Aleppo were bombed on Friday, halting the rescue service’s work.

The bombardment razed one centre to the ground and put another out of service, Ammar al-Selmo, the head of the White Helmets, told Reuters. A fuel store belonging to the civil defence was also destroyed in the air strikes.

“Today, we can say our work has stopped because of the lack of fuel, the destruction of the equipment and the intensity of the bombardment,” he said.

White phosphorus (WP) is an incendiary and toxic chemical substance used as a filler in a number of different munitions that can be employed for a variety of military purposes.

The use of the munitions on urban areas is ambiguous in international law but human rights groups have been deeply critical of the deployment of white phosphorous in various conflicts given the devastating burn injuries it can leave.

In 2004, US forces used artillery shells loaded with WP in Fallujah, Iraq, to target insurgents in so-called “shake and bake” fire missions. Israeli forces used weapons containing white phosphorus in Lebanon in 2006, and in Gaza in 2008 and 2009. At the time Amnesty International described the use of the US-supplied weapons on crowded residential areas in Gaza city as a “serious violations of international humanitarian law”.