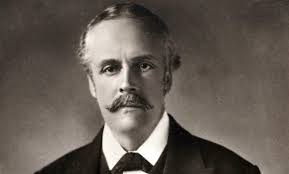 Arthur James Balfour . His declaration read: His Majesty’s government view with favour the establishment in Palestine of a national home for the Jewish people, and will use their best endeavours to facilitate the achievement of this object, it being clearly understood that nothing shall be done which may prejudice the civil and religious rights of existing non-Jewish communities in Palestine, or the rights and political status enjoyed by Jews in any other country
Share:

Britain should apologize for its 1917 declaration endorsing the founding of a Jewish homeland in Palestine and should recognize Palestine as a state, Palestinian President Mahmoud Abbas said on Thursday.

Speaking at the U.N. General Assembly, Abbas said that the Palestinian people had suffered greatly because of the Balfour Declaration in which Britain said it favored the establishment of a national home for the Jewish people in Palestine but that this should not undermine the rights of others living there.

“We ask Great Britain, as we approach 100 years since this infamous declaration, to draw the necessary lessons and to bear its historic, legal, political, material and moral responsibility for the consequences of this declaration, including an apology to the Palestinian people for the catastrophes, misery and injustice this declaration created and to act to rectify these disasters and remedy its consequences, including by the recognition of the state of Palestine,” Abbas said. “This is the least Great Britain can do.”

The British mission to the United Nations had no immediate comment.

Abbas raised the 1917 declaration – named for Arthur Balfour, then the British foreign secretary – in the context of other milestones, including the 1948 U.N. General Assembly resolution partitioning Palestine into two states and the 1967 war when Israel occupied the West Bank and Gaza Strip.

Israeli Prime Minister Benjamin Netanyahu, speaking a short time later at the annual gathering of world leaders, derided Abbas for focusing on the declaration and alluded to the possibility of the Palestinians suing Britain for it.

“President Abbas just attacked from this podium the Balfour Declaration. He is preparing a lawsuit against Britain for that declaration from 1917. That’s almost 100 years ago. Talk about being stuck in the past,” Netanyahu said.

An online video depicts Palestinian Foreign Minister Riad al-Malki reading a speech on behalf of Abbas in which he asks the Arab Summit meeting in July to support the Palestinians in the preparation of a legal case against the British government over the declaration.

The central issues to be resolved in the conflict include borders, the future of Jewish settlements in the West Bank, which most nations regard as illegal, the fate of Palestinian refugees and the status of Jerusalem.

Peace talks last collapsed in 2014 and there are few hopes for a resumption anytime soon in part because of Israeli anger at Palestinian attacks and Palestinian criticism of Israel’s construction of settlements on occupied land where Palestinians want to establish a state.

The Balfour Declaration states: “His Majesty’s Government view with favor the establishment in Palestine of a national home for the Jewish people, and will use their best endeavors to facilitate the achievement of this object, it being clearly understood that nothing shall be done which may prejudice the civil and religious rights of existing non-Jewish communities in Palestine or the rights and political status enjoyed by Jews in any other country,” it said.

Critics argue that Arabs were in the majority at the time and that the declaration failed to adequately take that into account.

In his speech, Netanyahu excoriated the United Nations for routinely passing resolutions critical of Israel, saying: “The U.N., begun as a moral force, has become a moral farce.”

He said this would change as nations increasingly seek Israeli cooperation on terrorism, cyber-security, intelligence-sharing and areas such as health and agriculture.

He invited Abbas to speak at Israel’s parliament, the Knesset, saying he would “gladly” come to Ramallah to speak at the Palestinian Legislative Council.

It was unclear if his offer was meant seriously. The Palestinian parliament has not met since 2007 and the first Arab leader to make a speech at the Knesset, Egypt’s Anwar Sadat in 1977, was assassinated in 1981 after making peace with Israel.