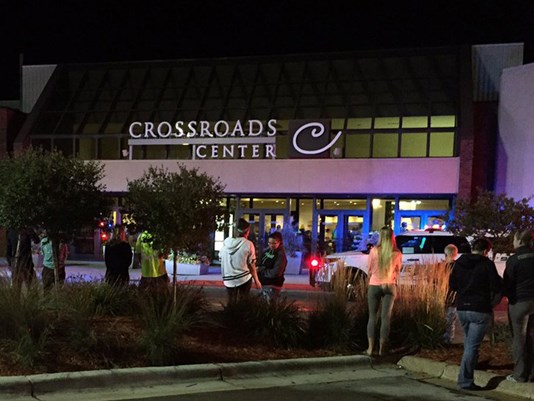 At least eight people were taken to a hospital with injuries after a stabbing attack at a Minnesota shopping mall that ended with the suspected attacker, who reportedly made references to Allah, shot dead by an off-duty police officer, authorities said.

St. Cloud Police Chief Blair Anderson said during a news conference shortly after midnight that eight people were taken to St. Cloud Hospital with non-life-threatening injuries following the attack first reported about 8:15 p.m. Saturday. One person was admitted. No further details were released.

Anderson said an off-duty police officer from another jurisdiction shot and killed the unidentified suspect. He did not say where that officer serves.

During the news conference, Anderson said the attacker who was armed with a knife reportedly made references to Allah during the attack and asked at least one person whether they were Muslim.

But Anderson declined to call the attacks an act of terrorism, saying the motive for the attacks isn’t known yet. “We will be diligent and get to the bottom of this,” Anderson said.

The mall remained on lockdown following the incident, but authorities said those remaining inside were expected to be released soon.

Harley and Tama Exsted of Isle, Minnesota, who were in St. Cloud to watch their son play in a college golf tournament, were in the mall when the incident occurred.

“All of a sudden I heard pop, pop, pop,” Harley Exsted told the St. Cloud Times. “I thought someone tipped over a shelf. All of a sudden these people started running. I just saw everybody running our way.”

There also were reports of some shots fired during the attack.

The couple were unharmed and said they helped another woman who was running from the scene to her car.