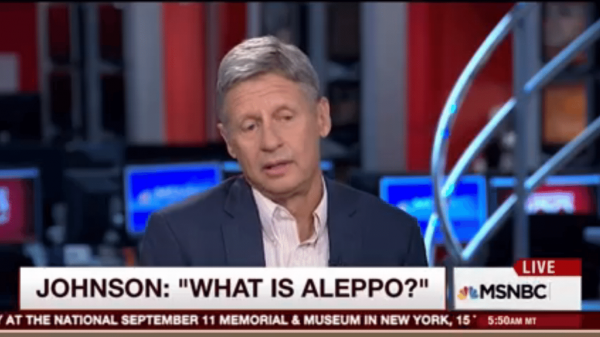 It would be easy to describe Gary Johnson’s appearance on MSNBC’s “Morning Joe” on Thursday as having doomed his third-party candidacy for president were it not for the fact that his candidacy was already doomed. The English language lacks a good way to describe something that was already in very bad shape and then, somehow, becomes far worse rather dramatically. Like if the Titanic had begun sinking but then blew up.

Johnson was talking politics with the “Morning Joe” crew when regular guest Mike Barnicle shifted gears.
“What would you do, if you were elected, about Aleppo?” Barnicle asked.

“And what is Aleppo?” Johnson asked.

A beat. “You’re kidding,” Barnicle replied. “No!” Johnson said, prompting Barnicle to explain that Aleppo is a city in Syria that epitomizes the country’s refugee crisis and has seen some of the worst horrors of its civil war. But … you probably knew that.

Barnicle: “What would you do…about Aleppo?”

Gary Johnson: “What is Aleppo?”

Barnicle: “Aleppo is in Syria.” https://t.co/bUjzLtkI2F

Johnson is running for president on the Libertarian Party line. He’s a noninterventionist. Once he got his bearings (perkily replying “Got it!” to Barnicle’s explanation), he suggested that the Syria problem was a function of American “regime change” efforts (presumably because of the instability in Iraq) and that the best way forward was to partner with Russia.

“So Aleppo is the center of a lot of people’s concerns across the planet about the terrible humanitarian crisis that is unfolding not only in Syria, but especially in Aleppo,” Scarborough said. “You asked, ‘What is Aleppo?’ Do you really think that foreign policy is so insignificant that somebody running for president of the United States shouldn’t even know what Aleppo is, where Aleppo is, why Aleppo is so important?”

The most generous way to view Johnson’s performance is that, in the moment, he blanked on the word. They’d been talking about whether he was going to be 2016’s Ralph Nader (that is, a spoiler), then Barnicle comes out with the Aleppo thing. Maybe he simply didn’t change tracks fast enough. (A writer for Fusion points out that he has done this before, at one point asking an interviewer, “Who’s Harriet Tubman?”)

That’s a very generous way to look at it, and hardly one that smooths this over for the candidate. Aleppo is a critical component of the current debate over foreign policy and something with which most Americans, and certainly a presidential candidate, should be familiar.

Bombing on “Morning Joe” (so to speak) is not — and should not — be fatal to a serious presidential candidacy. But Johnson doesn’t get many opportunities on the national stage, thanks to his outsider status — and this opportunity, it seems safe to say, was a missed one.