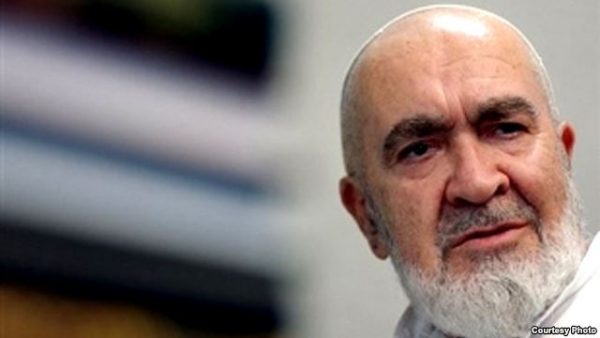 Iranian Grand Ayatollah Hossein Ali Montazeri fell out of favor with the clerical establishment, lost his status as Ayatollah Khomeini’s hand-picked successor and deputy, spent five years under house arrest, and was scorned for his support for the opposition Green Movement before his death in 2009.
Share:

Grand Ayatollah Hossein Ali Montazeri, once in line to become Iran’s supreme leader, has come back from the grave to haunt the Islamic establishment that punished him for openly criticizing the regime’s mass killing of political opponents in the late 1980s.

The release of an audio recording made in 1988 of Montazeri lashing out against the authorities for carrying out a fatwa issued by the father of the Islamic Revolution, Ayatollah Ruhollah Khomeini, against enemies of God and state has opened the lid on one of the Islamic republic’s darkest and most secretive chapters.

Montazeri paid dearly for his vocal criticism of the killing of an estimated 5,000 regime opponents in the late 1980s, including members of the banned Mujahedin-e Khalq Organization (MKO), leftist groups, and others.

Aside from Montazeri’s memoirs published in 2000, the true extent of his resistance to the culling was unproven, and officially questioned. But his voice of opposition comes through clearly in the grainy audio released in August on his official website, maintained from Iran by his family.

“In my view the biggest crime in the history of the Islamic republic, for which history will condemn us, has been committed at your hands,” Montazeri tells a group of judiciary officials involved in the executions, including current Justice Minister Mostafa Purmohammadi. “Your names will be written in history as criminals.”

The prominent theologian paid for his stance. Montazeri fell out of favor with the clerical establishment, lost his status as Khomeini’s hand-picked successor and deputy, spent five years under house arrest, and was scorned for his support for the opposition Green Movement before his death in 2009.

But the emergence of the audio — released, his son Ahmad Montazeri says, to counter attempts to distort history and to confirm the claims made in his father’s memoirs — has the establishment on the defensive again and has recreated an environment of retribution.

Caught in the crossfire of accusations is a conservative lawmaker who has called for the regime to come clean about the mass killings, leading parliament to form a commission to consider whether he should be removed as deputy speaker.

The authorities in Tehran have also gone after Ahmad Montazeri, who has been interrogated extensively and now faces charges for posting the audio.

The executions were carried out in the last days of the 1980-88 Iran-Iraq War, after Ayatollah Khomeini declared that apostates and those who had taken up arms against the Islamic republic were “waging war against God” and should be sentenced to death.

The secret fatwa was issued shortly after members of the banned Mujahedin-e Khalq Organization (MKO) who were based in Iraq at the time and supported by Saddam Hussein — made a last-ditch incursion into Iran known as Operation Mersad.

The incursion, which came less than a week after both Iran and Iraq had agreed to a UN-backed cease-fire to end the war, was swiftly and definitively repulsed by the Iranian military, resulting in the deaths of thousands of MKO members on the battlefield and thousands more in the ensuing mass killings of imprisoned members of the organization.

But it was not only members of the MKO whose fates were determined by the death committees. Over a five-month period in late 1988, tens of thousands of Iranians would be grilled about their religious beliefs and political affiliations, pressed on their willingness to sacrifice their lives for the Islamic republic — by walking through minefields, for example — and strong-armed to denounce their comrades on state media.

A wrong answer would almost certainly end in death by hanging or firing squad.

Mehdi Aslani, a former member of the leftist Fedayeen Khalq organization who served time in Gohardasht prison near Karaj, survived two appearances before the death committee in August 1988. Luck saved him the first time, when his questioning was interrupted by a telephone call. When he was called before his interrogators a second time a few days later, he was better prepared for the key question: “Are you a Muslim or a Marxist?”

“By then I and some others had realized that those who defended their beliefs and reiterated that they were Marxists would be without any doubt executed,” Aslani told RFE/RL by telephone this month. “Therefore, during my second session with the death committee, I said that I’m a Muslim who doesn’t pray.”

Aslani was sent back to his cell but would learn that many of his fellow prisoners did not survive.

The Iranian establishment has rarely acknowledged the executions, which critics and survivors say had been planned months in advance in an attempt to purge the prisons of regime opponents. The authorities have long enforced a news blackout on the issue, and harassed victims’ families seeking answers.

Justice Minister Purmohammadi defended the mass killings following the release of Montazeri’s audio, saying, “We’re proud to have carried out God’s order regarding the hypocrites [eds. a term used by Iranian officials to refer to MKO members] and stood up strongly against the enemies of God and the [Iranian] nation.”

But the position taken by Purmohammadi and other officials led deputy parliament speaker Ali Motahari, an outspoken conservative lawmaker, to make a surprising call for an investigation into the mass killings. He suggested in August that officials were pointlessly repeating slogans about the crimes of the MKO, which he said had killed his own father, without addressing the public’s questions surrounding the executions and revealing possible mistakes or negligence.

In response, some 35 lawmakers signed a complaint letter against Motahari calling for his dismissal as deputy speaker, and a committee has been established to consider the matter.

Others, too, have struck out in the face of criticism.

Assembly of Experts member Ayatollah Mohammad Reyshahri, who as intelligence minister was believed to have appointed the ministry’s representatives to the death committees, has called on those running Montazeri’s website to explain whether “the release of the audio after so many years hadn’t been with the aim of harming the Islamic establishment, whitewashing the [crimes of the] MKO, and taking revenge on the late imam [eds. a term used in Iran to refer to Ayatollah Khomeini].”

The Assembly of Experts, meanwhile, has called the release of the audio an attempt to “sanctify those who betrayed the Iranian nation.” And Mohammad Reza Naghdi, commander of the Basij militia, has said the executions of MKO members were carried out based on “Islamic, international, and domestic legal and religious principles.”

The Secrets Are Out

Speaking to RFE/RL in August, Ahmad Montazeri explained simply that it had been said that the documents revealed in his father’s memoirs, which included the wording of Khomeini’s fatwa, “are not real or that they’re not correct. This audio file confirms those documents.”

On September 5, he announced on social media that he had been charged with “acting against national security” for releasing the audio, which he removed from the website following a request by the Intelligence Ministry.

But death-committee survivor Aslani suggests that the Iranian authorities can no longer ignore the issue, comparing the release of the Montazeri audio to the discovery of the black box of a crashed airplane.

“We’re hearing the account of one the pilots,” he says, adding that “the only thing the Islamic establishment has not managed to do is to silence this voice of protest.”

Germany-based lawyer Sahar Mohammadi, who lost her mother and several other relatives in separate executions in the 1980s, says the tone of Montazeri’s voice and his apparent outrage hint at the magnitude of the mass killings. She expressed outrage that those involved “are still ruling, they’re still killing, and they’re saying they did the right thing.”

Paris-based Mojatab Taleghani, whose nephew was among those executed, says the official reaction does not come as a surprise. “They’re all accomplices in this crime, not defending themselves would be a confirmation that they’re criminals, as Montazeri called them on tape,” he said.