U.S. assessing if Russian use of Iran base violates U.N. resolution 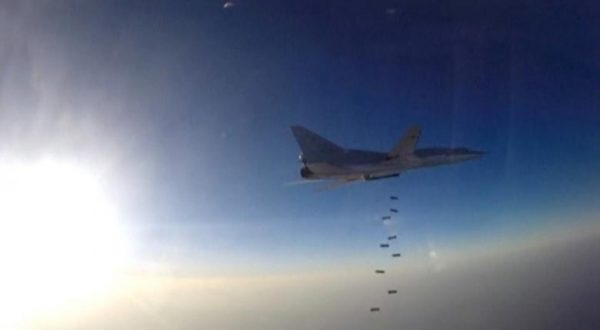 A still image, taken from video footage and released by Russia’s Defence Ministry on August 16, 2016, shows a Russian Tupolev Tu-22M3 long-range bomber based in Iran dropping off bombs at an unknown location in Syria. Ministry of Defence of the Russian Federation/Handout via Reuters
Share:

The United States is looking at whether Russia has violated a U.N. Security Council resolution on military dealings with Tehran by using an Iranian air base to carry out strikes inside Syria, the State Department said on Wednesday.

State Department spokesman Mark Toner said U.S. government attorneys had not yet decided whether they think Russia’s use of the Iranian base is a violation of U.N. Security Council Resolution 2231, which was passed as part of the Iran nuclear deal.

The resolution governs some military interactions between Iran and other countries, including the supply, sale or transfer of military technologies or the provision of training or financial assistance related to the acquisition of new technologies.

“As I understand it, it’s not just supplying the Iranians certain weapons or certain offensive weaponry. It’s more complex than that,” Toner told a news briefing. “Our lawyers are looking at it. We haven’t made an assessment,” he added.

Moscow first used Iran as a base from which to launch air strikes in Syria on Tuesday, deepening its involvement in the five-year-old Syrian civil war and angering the United States. Russian officials on Wednesday rejected U.S. criticisms of its use of the base.

Toner said that beyond the question of Russia’s use of a base in Iran, its air strikes often “indiscriminately” hit civilian targets and moderate Syrian opposition groups.

“It’s not helpful because … it continues to complicate what is already a very dangerous situation,” Toner said.

“And so our concerns remain very vivid,” he added. “We’re trying to remain focused on … trying to get a cessation of hostilities back in place in Syria. And this doesn’t help it.”

Toner said the United States was still open to coordinating with Russia in the fight against Islamic State, but “we have certain issues that we want resolved” before entering into such a deal.

“We need full humanitarian access immediately … and we don’t have it,” he said.

It is not clear why the US is raising  the issue of the Russian flights from Iran , since according to Voice of America  the U.S.-led coalition fighting Islamic State in Iraq and Syria cleared the way for Russian bombers to pass through Iraq on their way to Syria via an airbase in Iran.

US Col. Chris Garver, the coalition spokesman, told reporters via teleconference from Baghdad that the Russians notified the coalition about their planned movement through Iraqi airspace as per a memorandum of understanding for flight safety made between Russia and the United States months ago.

“They informed us they were coming through, and we ensured safety of flight as those bombers passed through the area and toward their target and then when they passed out [of Syria] again,” Garver said.