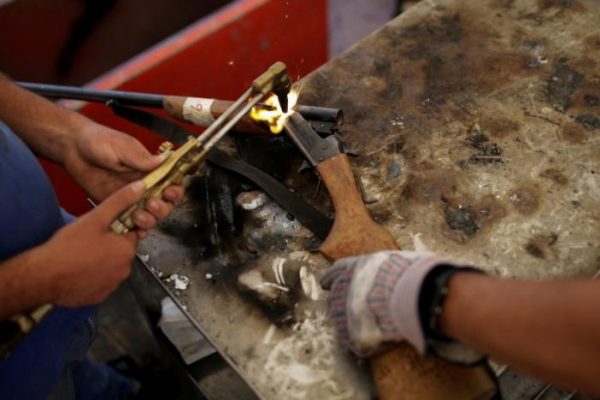 A weapon is being destroyed during an exercise to disable seized weapons in Caracas, Venezuela August 17, 2016. REUTERS/Marco Bello
Share:

Venezuelan police crushed and chopped up nearly 2,000 shotguns and pistols in a Caracas city square on Wednesday, as the new interior minister relaunched a long-stalled gun control campaign in one of the world’s most crime-ridden countries.

Interior Minister Nestor Reverol said the event marked the renewal of efforts to disarm Venezuelans, through a combination of seizures and a voluntary program to swap guns for electrical goods.

Venezuela has the world’s second highest murder rate and the street gangs that plague its poor neighborhoods have become increasingly heavily armed in recent years, at a time when a deep recession has reduced resources available to police.

Gangs often get weapons from the police, either by stealing them or buying them from corrupt officers, experts say.

With inflation of 185 percent in 2015 and a currency collapse, police salaries have fallen far behind rising prices creating more incentives for corruption.

“We are going to bring disarmament and peace,” Reverol told reporters, while police officers drilled and sawed at rusty shotguns, home made pistols and some newer weapons.

Other guns were crushed in truck-mounted presses. Some members of the public watched, although more danced to a nearby sound system playing salsa music.

Venezuela has also bought laser technology to mark ammunition, Reverol said, in an attempt to keep a registry of the bullets given out to the South American nation’s many state and municipal police forces.

Experts say that much of the ammunition used in crimes in Venezuela is made at the country’s government munitions factory and sold on by corrupt police.