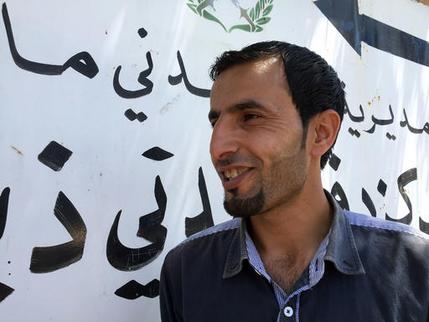 In this July 18, 2016 photo, Sabri Mashaaleh, 29, stands in the center of the small, remote farming town of Dhiban, Jordan, where he and other unemployed young men had pitched a protest tent over the summer, staging daily protests and demanding jobs before troops dispersed them by force. Rising unemployment, particularly among the young, has become Jordan’s No. 1 problem, raising fears of radicalization in the pro-Western kingdom amid a deepening economic slump. (AP Photo/Karin Laub)
Share:

Sabri Mashaaleh feels misled and angry: The 29-year-old studied counseling expecting to find a civil service job, in line with what used to be a typical life path for college-educated Jordanians.

His last hopes were crushed earlier this summer when troops tore down the tent in his small, remote hometown of Dhiban where he and other jobless young men had staged daily sit-ins for two months, demanding employment.

With protests silenced, Mashaaleh sees a dark future for Dhiban.

The Dhiban unrest highlights what the Jordanian government now says is its biggest challenge- rising unemployment, particularly among the young, fueled by an economic slump and spillover from conflicts in Syria and Iraq.

Youth unemployment is endemic in the troubled Middle East, where a demographic “youth bulge” has increased the number of jobseekers, including college graduates, while economies have stalled amid spreading violence.

Even though Jordan’s unemployment problem is not unique, some say the pro-Western monarchy warrants special attention because of its strategic importance. The country is part of the U.S.-led military coalition against Islamic State extremists who control parts of Syria and Iraq and have attracted thousands of followers in Jordan.

Any destabilization of Jordan, possibly triggered by economic problems, would alarm the kingdom’s allies.

The government needs to take urgent action, said economist Omar Razzaz, who chairs a national team of experts trying to devise a new employment strategy. “We cannot afford to have the unemployment problem turn into a radicalization problem,” he said. “That’s the time bomb we are facing.”

Economic growth in Jordan dropped from 3.1 percent in 2014 to 2.4 percent last year and 2.3 percent in the first quarter of 2016, according to the World Bank. Continued fighting in Syria and Iraq forced the closure of Jordan’s main overland trade routes in 2015 and also harmed tourism and construction.

Unemployment rose from 13 percent last year to 14.7 percent in 2016. Among 18- to 24-year-olds, 35 percent have no jobs, said Lea Hakim, the World Bank’s country economist for Jordan. “The economy has not been generating enough jobs, not quantity and not quality jobs, for its population,” she said.

The influx of Syrian refugees since 2011 has further expanded the labor force. Jordan hosts some 660,000 registered refugees, though a recent census counted twice as many Syrians in Jordan, out of a total population of 9.5 million.

In the first years of the Syria crisis, Jordan barred refugees from working legally to protect its labor force. Instead, tens of thousands of Syrians worked informally in construction, farming and retail – sectors until then dominated by migrant workers from Africa and Asia because the jobs paid too little to attract Jordanians.

It struck a deal with donors to try to turn the refugee crisis into a development opportunity for Jordan and to deter Syrians from migrating to Europe by improving their lives in the region.

The kingdom agreed to issue work permits to tens of thousands of Syrians. In exchange, Europe eased trade restrictions to encourage investment in Jordan, while donors, including the World Bank, promised concessional financing and grants for development and labor-intensive projects in the country.

Ferid Belhaj, the World Bank’s regional director, said he expects this tradeoff to generate growth and jobs in three or four years. “The crisis is a huge challenge, but it can turn into an opportunity,” he told The Associated Press.

Razzaz, the economist, said that in the meantime, the government should launch an ambitious public works program, including employing large numbers of Jordanians to care for children and the elderly.

“We should … start this program before we see protests,” said Razzaz, who also heads the Jordan Strategy Forum think tank. The government and donor countries have funded pilot programs that fall short of needs, he said.

Jordanians need to understand that the public sector can no longer be the main employer, Fakhoury said. Opportunities are available outside the civil service, “but it requires also a change of mindset,” he said.

Two dozen protesters, including Mashaaleh, were initially detained when troops backed by armored vehicles dismantled the protest tent in June, but all have been released. Mashaaleh said the protests were peaceful, though the Interior Ministry said three officers were wounded when shots were fired at them during a clash in Dhiban.

The town’s mayor, Fhaid al-Rawahneh, 61, said that “we don’t want to fight with the security.”

He said the government must do more to bring factories to the region. An attempt to attract a pre-fab home construction company to Dhiban with the promise of free land became entangled in red tape, he said.

Young people in Dhiban have few options. Those who can mostly sign up for police or military work in Amman, and the high transportation costs take a big cut from their meager wages.

Al-Rawahneh said only one of his four college-educated children has a job.

“There is unemployment in every family,” he said. “Our only demand is to find jobs.”