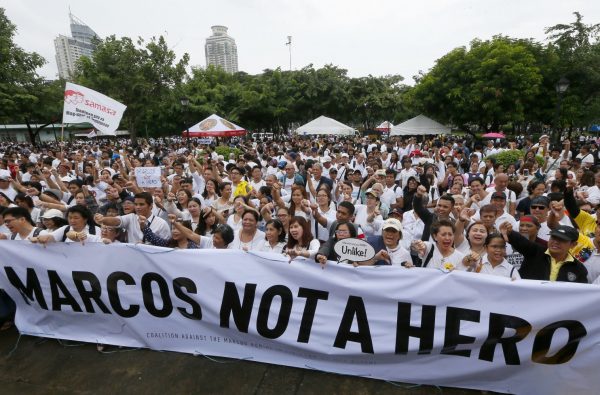 Protesters gather at Rizal Park during a rally to oppose the burial of the late Philippine dictator Ferdinand Marcos at the Heroes’ Cemetery in Manila, Philippines, Sunday, Aug. 14, 2016. It was the biggest gathering so far since President Rodrigo Duterte ordered the burial of Marcos with full military honors and with the opposition announcing its plan to file a petition with the Supreme Court. (Bullit Marquez/Associated Press)
Share:

Hundreds of Filipinos rallied in stormy weather Sunday against President Rodrigo Duterte’s decision to allow dictator Ferdinand Marcos to be buried in a heroes’ cemetery, but Duterte remained firm in his stance despite growing opposition.

About 1,500 protesters carrying a large streamer that read “Marcos not a hero” braved the rain, wind and mud at Manila’s seaside Rizal Park to call on Duterte to reconsider his decision. They launched a signature campaign to try to stop the burial, tentatively set for next month.

Loretta Ann Rosales, who formerly headed the government’s Commission on Human Rights, said she was tortured and molested along with thousands of other detained left-wing activists under Marcos during a dark era that clearly shows why the brutal leader does not deserve to be accorded any state honors.

“Is that not enough evidence? … Is Marcos a hero?” Rosales asked, with the crowd yelling back: “No!”

Sen. Risa Hontiveros, who was among the protesters, said she has filed a Senate resolution opposing a hero’s burial for Marcos, adding that Duterte should not commit “this atrocious mistake” of bestowing honors to the dictator.

“Marcos went down in history as an unrepentant enemy of our heroes,” Hontiveros said. “To honor the man a hero and bury his remains in a place reserved for the brave and martyred is an inimitable political abomination.”

Burying a dictator accused of massive rights violations and plunder at the heroes’ cemetery has long been an emotional and divisive issue in the Philippines, where Marcos was ousted by a “people power” revolt in 1986. He was flown to Hawaii, where he lived with his wife and children in exile until he died in 1989.

His remains were later returned to his northern Philippine hometown and displayed in a glass coffin. His wife, Imelda, and two of their three children gradually regained political influence after being elected to public office.

Duterte, who was sworn in as president in June, argues that Marcos is qualified to be buried at the military-run cemetery as a former soldier and president. He has disclosed that he once voted for Marcos and that his late father, a politician, served in Marcos’s Cabinet.

Duterte’s communications secretary, Martin Andanar, said Sunday that the president’s position “remains firm,” arguing that military rules allow Marcos to be buried at the hollowed cemetery as a former president and soldier.

A group of former political detainees and rights victims under Marcos called Selda said in a statement that it plans to ask the Supreme Court to stop what it calls a “grave injustice” to thousands of human rights victims.

Communist guerrillas, who are set to restart peace talks with Duterte’s government this month, condemned his move for its “extreme insensitivity.”

“Duterte is virtually deleting Marcos’ bloody record as a military despot and the fascist violence, human rights violations, corruption and economic hardships he made the Filipino people suffer through 14 years of dictatorship,” the rebels said in a statement.