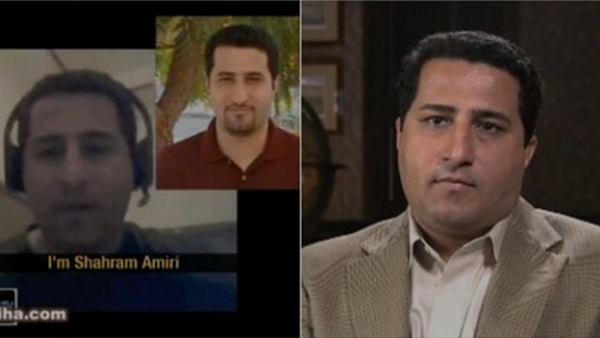 Three videos of Shahram Amiri giving conflicting accounts of his circumstances emerged when he was in the US. He was hanged by the Iranian authorities
Share:

An Iranian nuclear scientist detained since 2010 has been executed, his family has told the BBC.

Shahram Amiri’s mother said the body of her son had been returned to their hometown with rope marks around his neck, showing that he had been hanged.

He was later buried. Amiri had been held at a secret location after returning from the US, where he said he had been forcibly taken by the CIA.

Some reports say he had in-depth knowledge of Iran’s nuclear programme.

He surfaced in the US a year later saying he had been kidnapped and put under “intense psychological pressure to reveal sensitive information” by the CIA.

In a video recording – apparently made in the US – he said: “They took me to a house located somewhere that I didn’t know. They gave me an anaesthetic injection.”

In another video he claimed he had escaped from US custody. He returned to Tehran in 2010 to a hero’s welcome.

Timeline of a disappearance

US officials told the BBC at the time that Mr Amiri had defected of his own free will and provided “useful information” to the US.

He was later reported to have been given a long prison sentence after his return to Tehran.

His family confirmed at the time that he had been detained and told the BBC that they feared for his life.

Iran has been suspected for more than a decade of seeking to develop nuclear weapons – an allegation it denies, saying it is pursuing civilian nuclear energy.

In January, Tehran reached a deal with foreign powers to curb its nuclear programme in return for the lifting of crippling economic sanctions.