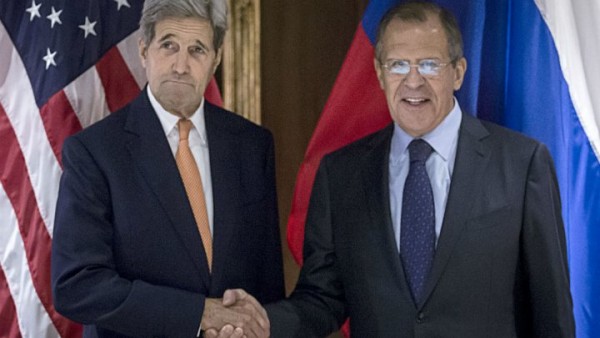 U.S. Secretary of State John Kerry and his Russian counterpart, Sergei Lavrov, met on Tuesday to discuss a U.S. proposal for closer military cooperation on Syria.

They met on the sidelines of a meeting of Southeast Asian nations in Laos, the second time they have met this month to discuss the Syria plan, which would see Washington and Moscow share intelligence to coordinate air strikes against the al Qaeda-affiliated Nusra Front and prohibit the Syrian air force from attacking moderate rebel groups.

Kerry has defended the proposal despite deep skepticism among top American military and intelligence officials over Russia’s intentions.

Kerry’s State Department and White House allies say the plan is the best chance to limit the fighting that is driving thousands of Syrian civilians, with some trained Islamic State fighters mixed in, into exile in Europe and preventing humanitarian aid from reaching tens of thousands more, as well as preserving a political track.

The meeting in Laos comes amid accusations that Russia is behind the hacking of Democratic National Committee (DNC) emails released by Wikileaks on Friday.

Lavrov brushed aside the accusations at the start of his meeting with Kerry, saying: “I don’t want to use four-letter words.”

Cyber security experts and U.S. officials have said there is evidence that Russia engineered the release of the emails in order to influence the U.S. presidential election.

The FBI said it was investigating a cyber intrusion at the DNC, which has led to discord as the party’s convention in Philadelphia opens on Monday to nominate former U.S. secretary of state Hillary Clinton as its candidate.

Although the hacking of the DNC was known to officials and cyber security experts a month ago, the timing of the release of the contents of communications within the party is the concern for U.S. authorities.