Cooperation with Russia in Syria not based on trust: U.S. general 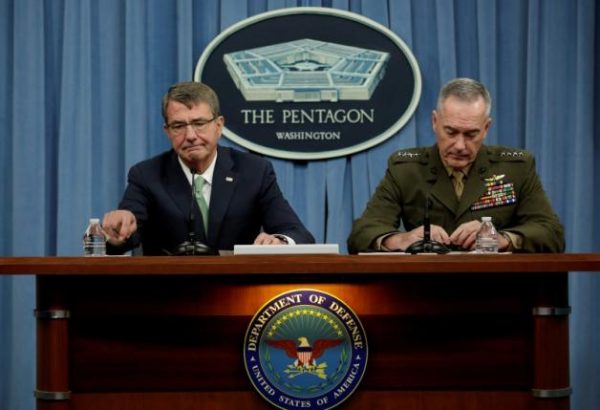 Any military or intelligence cooperation between the United States and Russia to strike targets in Syria would include measures to ensure U.S. operational security and would not be based on trust, a top U.S. military official said on Monday.

U.S. Secretary of State John Kerry said on Friday that he would meet his Russian counterpart in the coming days to discuss an American proposal for closer military cooperation and intelligence sharing on Syria.

The proposal, which Kerry hopes to conclude within weeks, envisions ways in which Washington and Moscow would share intelligence to coordinate air strikes against the al Qaeda-affiliated Nusra Front and prohibit the Syrian air force from attacking moderate rebel groups.

The proposal has met with deep skepticism by top American military and intelligence officials.

“We’re not entering into a transaction that is founded on trust,” Marine General and Chairman of the Joint Chiefs of Staff Joseph Dunford said at a news conference with U.S. Defense Secretary Ash Carter.

“There will be specific procedures and processes in any transaction we might have with the Russians that will account for protecting our operational security.”

Many U.S. officials are concerned that sharing intelligence with Russia could risk revealing U.S. intelligence sources, methods and capabilities.

Dunford said Monday that he doesn’t trust the Russians to live up to agreements and was wary of plans to cooperate with them on ending Syria’s civil war.

Should Kerry’s negotiations with Moscow be successful, the U.S. should be mindful that “We’re not entering into a transaction that’s founded on trust,” Dunford said.