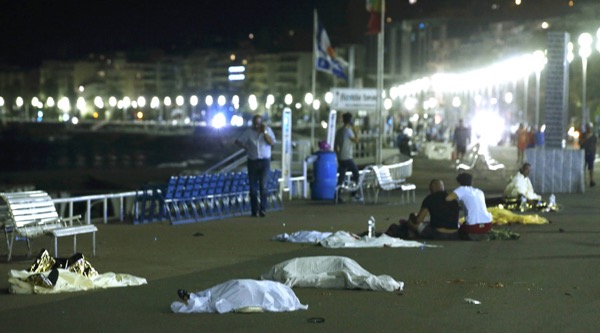 Bodies are seen on the ground July 15, 2016 after at least 80 people were killed in Nice, France, when a truck ran into a crowd celebrating the Bastille Day national holiday, July 14, 2016. © Eric Gaillard / Reuters
Share:

He confirmed that a measure extending the country’s state of emergency would go before lawmakers next week.

In a related development French Foreign Minister Jean-Marc Ayrault has cut short a visit to Mongolia to return to Paris because of the Nice attack.

A foreign ministry spokesman says Ayrault was in Mongolia for the Asia-Europe summit and is expected back late Friday.

Barbaric murder
Germany’s top security official says the attack in Nice is “incomprehensible and simply awful,” and that “this barbaric murder must be finally brought to an end.”

Interior Minister Thomas de Maiziere said Friday he was shocked by the news of the attack and that his thoughts were with the victims and their family.

De Maiziere says “our friendship with the French people will become even deeper in mourning, anger and determination.”