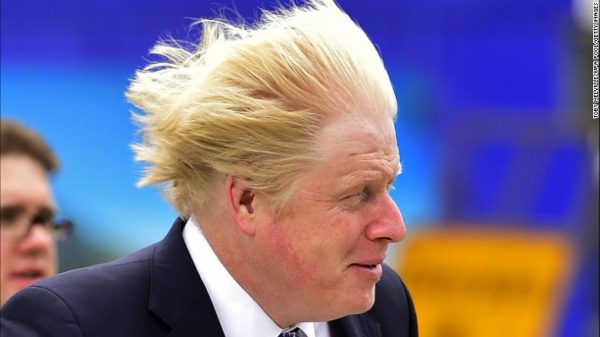 Boris Johnson was named in July last year as new British Foreign Secretary . Europe politics class branded him a “Liar” who lied to his people about Bexit
Share:
Branding him a liar, a coward or a joker, Europe’s political class greeted Eurosceptic Boris Johnson’s appointment as Britain’s foreign minister with a chorus of dismay on Thursday.

French Foreign Minister Jean-Marc Ayrault eschewed the customary diplomatic niceties to ask how a man who had told lies as leader of the Leave campaign in last month’s British EU referendum could be a credible interlocutor.

“I am not at all worried about Boris Johnson, but … during the campaign he lied a lot to the British people and now it is he who has his back to the wall,” Ayrault told Europe 1 radio.

“I need a partner with whom I can negotiate and who is clear, credible and reliable.”

Johnson told reporters later he had received “a charming letter” from Ayrault saying how much he looked forward to working together and to deepening Anglo-French cooperation.

But he acknowledged: “After a vote like the referendum result on June 23, it is inevitable there is going to be a certain amount of plaster coming off the ceiling in the chancelleries of Europe.

“It wasn’t the result they were expecting. Clearly they are making their views known in a frank and free way.”

Johnson was accused of misleading voters by proclaiming that Britain was paying 350 million pounds ($468 million) a week to the EU that could be spent on the National Health Service. The figure did not take account of London’s budget rebate or of EU spending on public and private sector projects in the UK.

EU leaders including European Council President Donald Tusk condemned Johnson’s comparison during the campaign of the EU’s goals with those of Hitler and Napoleon.

The rambunctious former mayor of London has insulted or lampooned a series of world leaders including U.S. President Barack Obama, Turkish President Tayyip Erdogan, German Chancellor Angela Merkel and both the Democratic and Republican candidates to succeed Obama.

After the June 23 vote to leave the European Union, Johnson took time off to play cricket and abruptly dropped a widely expected bid to stand as prime minister in place of fellow Conservative David Cameron, who had campaigned to stay in.

Cameron’s successor, Theresa May, named the former mayor of London and one-time EU-bashing Brussels journalist as her foreign secretary late on Wednesday, and put another veteran Eurosceptic, David Davis, in charge of EU exit negotiations.

German Foreign Minister Frank-Walter Steinmeier said Johnson’s appointment was a clear signal that Britain intended to leave the European Union and urged May to end uncertainty and give formal notice soon of London’s intention to withdraw.

Merkel declined comment on Johnson’s elevation when asked on a visit to Kyrgyzstan, but Steinmeier indirectly branded him “irresponsible”.

Speaking just before Johnson was appointed, Steinmeier said: “It is bitter for Britain. People there are experiencing a rude awakening after irresponsible politicians first lured the country into Brexit then, once the decision was made, bolted and instead of taking responsibility went off to play cricket.

“I find this outrageous but it’s not just bitter for Britain. It’s also bitter for the European Union.”

Attending a Bastille Day reception at the French ambassador’s residence in London on Wednesday evening, Johnson was booed by a small section of the crowd of several hundred mostly French and British guests.

That was a foretaste of the potentially hostile reception he can expect when he attends his first EU foreign ministers’ meeting in Brussels on Monday.

Former Belgian Prime Minister Guy Verhofstadt, now the leading federalist liberal in the European Parliament, summed up the feelings of many on the continent when he tweeted: “Clearly British humour has no borders.”

Rebecca Harms, leader of the ecologist Greens group in the EU legislature said: “At first I thought it was a joke. Now I don’t know whether to laugh or cry. But I know it’s not good when irresponsibility is rewarded in politics.”

Johnson made his name as a Daily Telegraph journalist in Brussels in 1989-94, attacking the federalist ambitions of then European Commission President Jacques Delors and lampooning EU regulation, often stretching the facts to breaking point.

“He was already a little brat back then and he hasn’t changed,” Pascal Lamy, who was Delors’ chief of staff and later head of the World Trade Organisation, said last month.

Earlier this year, Johnson won a magazine prize for a limerick depicting Erdogan cavorting with a goat, written to ridicule the Turkish leader’s efforts to have German courts punish a German satirist for insulting him.

“His negative comments on Erdogan and Turkey are unacceptable,” a senior Turkish official said. “However we’re sure of one thing, that British-Turkish relations are more important than that and can’t be hostage to these statements.

“With his new responsibilities we are expecting a more positive attitude from Mr. Johnson,” said the official of the new British minister, who had a Turkish great-grandfather.

Some of the strongest criticism came in Britain’s own media.

The left-leaning Daily Mirror tabloid splashed a picture of then mayor Johnson strapped on a zipwire at the London Olympics wearing a helmet and waving Union Jack flags.