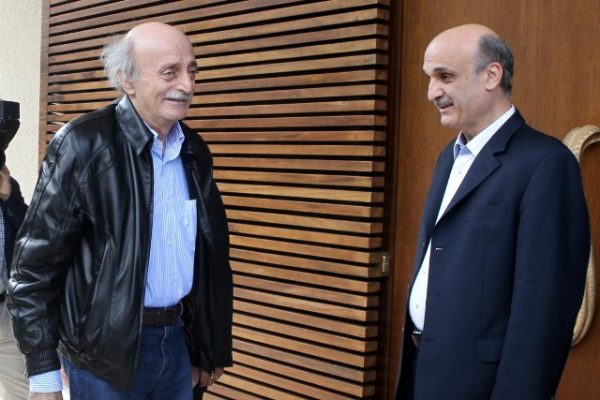 Progressive Socialist Party leader MP Walid Jumblatt told Lebanese Forces leader  Samir Geagea during their latest meeting that as far  MP Michel Aoun’s nomination for president  is concerned he has to “talk” to Speaker Nabih Berri before anyone else al-Hayat newspaper  reported  on Friday.

“The solution is not in my hand and you have to talk to Hezbollah, former PM PM SaadHariri and Speaker (Nabih) Berri,” al-Hayat quoted Berri as saying.

“Jumblatt then stressed to Geagea that the key is  Speaker Berri  and he has to talk to him first,” the speaker added, according to al-Hayat.

There has been speculation in the country that the latest rapprochement between Aoun and Berri could lead to an agreement over the stalled presidential election or the parliamentary polls.

According an  observer ,” the strange part is the fact  Berri is Hezbollah’s key ally and will do whatever Hezbollah tells him( to do ) ”  The observer added “this is perhaps another one of the their role playing acts .”

After talks with Daryan Aoun announced that “communication with Future Movement is still ongoing,” stressing the importance of “reaching an understanding among the various Lebanese political forces over all issues.”

Aoun also telephoned Saudi Ambassador to Lebanon Ali Awadh Asiri to offer Eid greetings and extend condolences over the suicide bombings that hit Saudi Arabia, NNA reported.
The Lebanese parliament failed against last month and for the 41st time in a row to elect a president to replace Michel Suleiman whose term ended on May 25 , 2014.

As in all  the previous  sessions the parliament was unable to reach a quorum because the Iranian-backed Hezbollahmilitant group and its ally MP Michel Aoun’s Change and Reform bloc MPs boycotted the session, because they could not reportedly guarantee Aoun’s election as a president.