May, Leadsom in all-women race for UK conservative leadership 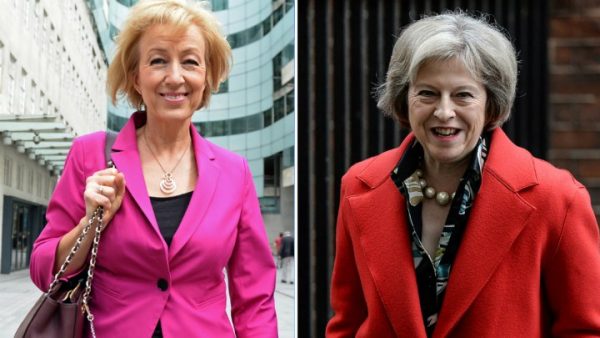 Andrea Leadsom (left) and Theresa May (right) are the two remaining candidates for the Conservative leadership
Share:

Interior minister Theresa May and eurosceptic rival Andrea Leadsom emerged on Thursday as the two candidates who will battle to become Britain’s next prime minister and lead the country out of the European Union.

May won 199 votes and Leadsom 84 in a second ballot of lawmakers of the governing Conservative party. Justice Secretary Michael Gove took just 46 votes and was eliminated from the race.

Around 150,000 grassroots Conservatives across the country will now vote to decide whether May or Leadsom becomes Britain’s first woman prime minister since Margaret Thatcher was forced from office in 1990.

The result of the contest is expected by Sept. 9, meaning businesses and investors must endure two more months of uncertainty over who will lead the huge task of disentangling Britain’s economy from the EU while trying to safeguard trade and investment.

Prime Minister David Cameron said last month he was stepping down after voters, many of them swayed by concerns over high immigration and a desire to reclaim ‘independence’ from Brussels, rejected his entreaties to keep Britain in the EU and his warnings that leaving would spell economic disaster.

“This vote shows that the Conservative Party can come together, and under my leadership it will,” May told supporters after the results were announced.

Until a couple of weeks ago Leadsom, a junior energy minister, was barely known to most Britons, but as one of the leading voices in the successful Leave campaign she has dramatically emerged as a serious challenger as better-known rivals have been felled by political intrigue.

“She’s the future. What you want is someone who’s not been in the Westminster bubble, she’s had a real job in the real world and that’s what people are looking for. I think they’re fed up with the political elite,” said Leadsom backer Peter Bone.

Bookmakers William Hill made May the 1/5 favourite to win, implying an 83 percent chance, while Leadsom was quoted at 7/2, or 22 percent.

Investor concerns about the impact of the “Brexit” referendum have mounted in recent days, with asset managers suspending trading in commercial property funds worth billions of pounds after too many people rushed to withdraw their money at once.

The pound sterling has sunk below $1.30 for the first time in more than three decades as investors anticipate a slowdown in growth in Britain in the wake of the vote.

Mohamed El-Erian, chief economic adviser to Europe’s largest insurer Allianz, which has around 1.3 trillion euros ($1.4 trillion) under management, said the pound could sink towards parity with the dollar unless politicians got a grip.

“After the Brexit referendum, the UK has to urgently get its political act together,” El-Erian told Reuters in a telephone interview. “’Plan B’ depends on the politicians in London and across the Channel, but so far they have not stepped up to their economic governance responsibilities.”

The Bank of England, which warned before the referendum that a Brexit vote would push Britain into a “material” economic slowdown, could cut interest rates as soon as next Thursday.

Interior minister May, 59, has served for the past six years in one of the toughest portfolios in government. Leadsom has never been a member of the cabinet.

But despite her strong lead in Thursday’s vote, May is far from assured of winning the race for Downing Street. During the referendum campaign she took a low-key stance in favour of Britain remaining in the EU – unlike Leadsom, who fought on the winning side.

Grassroots party members have strong eurosceptic leanings, a factor that could favour Leadsom.

The 53-year-old, who entered parliament only six years ago, said on Thursday her top priority would be to guarantee tariff-free trade with the EU after leaving.

But the EU is likely to insist that this would only be feasible if Britain continued to allow other EU nationals to live and work freely in Britain, an arrangement that has pushed immigration to record levels and was a powerful factor behind the success of the Leave side in the referendum.

Supporters of the rival candidates were quick to start making their pitches to the wider membership. May backer Chris Grayling described the MPs’ vote as ‘overwhelming’ and said “I hope members will be looking carefully.”

Leadsom supporter Owen Paterson said: “It’s quite remarkable to come from absolutely nowhere to a strong second. I’m really confident that she’s in tune with the members. She’s got this tremendously optimistic view of where this country is going.”
Leadsom has put her 25 years’ experience working in financial services at the centre of her leadership bid, having worked at Barclays Bank and fund manager Invesco Perpetual.

But some of her career credentials have been called into doubt. Reuters spoke to five former Invesco colleagues, including four in senior management positions, who said Leadsom did not have a prominent role or manage client money.

She told the BBC that questions about her career record were “ridiculous” and her CV was “all absolutely true”.

Gove shocked his party colleagues last week by abruptly withdrawing his support for former London mayor Boris Johnson, previously seen as the front-runner, and effectively forcing him from the race.

Some viewed that as an act of treachery that damaged Gove’s own prospects. A Gove aide was also criticised for urging May supporters to vote tactically and lend him support to keep Leadsom from advancing to the final run-off.