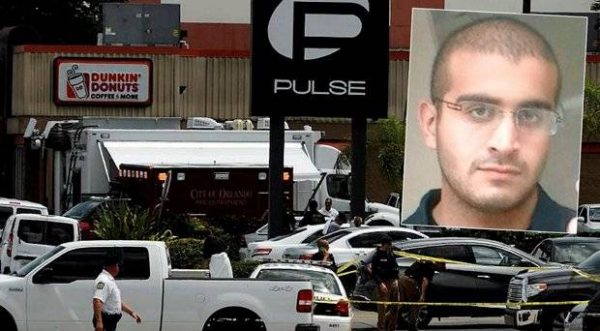 A gunman armed with an assault rifle killed 50 people at a packed gay nightclub in Orlando, Florida on Sunday in the worst mass shooting in U.S. history which President Barack Obama described as an act of terror and hate.

Police killed the shooter at the Pulse nightclub, who was identified as Omar S. Mateen, a 29-year-old Florida resident and U.S. citizen. A top U.S. congressman said Mateen may have pledged allegiance to the Islamic State militant group.

U.S. officials cautioned, however, that they had no immediate evidence of any direct connection with Islamic State or any other foreign extremist group, nor had they uncovered any contacts between the gunman and any such group.

“We know enough to say this was an act of terror, an act of hate,” Obama said in a speech from the White House. “And as Americans, we are united in grief, in outrage and in resolve to defend our people.”

U.S. officials have reached no definitive judgment on the killer’s precise motives, Obama added. “We must spare no effort to determine what, if any, inspiration or association this killer may have had with terrorist groups,” he said.

Fifty-three people were wounded in the rampage. It was the deadliest single U.S. mass shooting incident, eclipsing the 2007 massacre of 32 people at Virginia Tech university.

Pulse was crowded with some 350 revelers at a Latin music night when the attack happened.

“Everyone get out of pulse and keep running,” the club’s management wrote on Facebook as the incident unfolded.

A hostage situation developed, and three hours later SWAT team officers used armored cars to storm the club before shooting dead the gunman. It was unclear when the victims were killed.

Video footage showed police officers and civilians carrying people away from the club and bending over others on the ground. Dozens of police cruisers, ambulances and other emergency vehicles could be seen in the area.

“Today we’re dealing with something that we never imagined and is unimaginable,” Orlando Mayor Buddy Dyer said, more than doubling an earlier estimate that about 20 bodies had been found.

Dyer said 39 people were killed inside the club, two outside, and nine others died after being rushed to hospital.

Dozens of terrified patrons, some of whom had been hiding in restrooms, were rescued. One officer was injured when he was hit in his helmet while exchanging fire with the gunman, police said.

U.S. Representative Adam Schiff, the top Democrat on a congressional intelligence committee said that according to local law enforcement the shooter had declared his allegiance to Islamic State.

He noted that the shooting took place during the Muslim holy month of Ramadan, and that Islamic State leaders who control territory in Syria and Iraq have urged attacks during this time.

All of this “indicates an ISIS-inspired act of terrorism,” he said in a statement, referring to Islamic State.

Likely Republican presidential nominee Donald Trump, who has called for a temporary ban on Muslims entering the United States, said he was “right on radical Islamic terrorism.”

He called in a tweet on Sunday for “toughness and vigilance.” Democratic candidate Hillary Clinton tweeted a brief statement after the attacks, but did not speculate on the motives of the gunman.

FOX News Channel reported that Mateen was known to the FBI as recently as 2013, citing an unnamed source.

If confirmed as an act of terrorism, it would be the deadliest such attack on U.S. soil since Sept. 11, 2001, when al Qaeda-trained hijackers crashed jetliners into New York’s World Trade Center, the Pentagon and a field in Pennsylvania, killing some 3,000 people.

Asked if the FBI suspected the gunman might have had inclinations toward militant Islamism, including a possible sympathy for Islamic State, Ronald Hopper, an assistant FBI agent in charge, told reporters: “We do have suggestions that the individual may have leanings toward that particular ideology. But right now we can’t say definitively.”

Also on Sunday, a man was arrested in California with assault weapons and possible explosives and told authorities he was in the Los Angeles area for the gay pride festival, the Los Angeles Times reported.

U.S. Senator Marco Rubio of Florida, who sits on the Senate intelligence committee, told CNN he understood the Orlando gunman had worked for a security company.

“Gay clubs hold a significant place in LGBTQ history. They were often the only safe gathering place and this horrific act strikes directly at our sense of safety,” the group said in a statement. “We will await the details in tears of sadness and anger.”

Orlando has a population of more than 270,000 and is the home of the Disney World amusement park and many other tourist attractions that drew 62 million visitors in 2014.

It was the second deadly shooting at an Orlando night spot in as many nights. Late Friday, a man thought to be a deranged fan fatally shot singer Christina Grimmie, a former contestant on “The Voice”, as she was signing autographs after a concert.

Mateen, who was shot and killed by police in a gunfight at the Pulse nightclub, was a U.S. resident, born in 1986. According to reports on social media, he is the son of Afghan parents.

He was a registered Democrat and listed his race as “other,” according to Florida voting records.

An online records search indicated Mateen was married and had lived in Florida for at least 10 years.

Mateen reportedly has no criminal history, so it is likely he would have been able to legally buy weapons. He was armed with a handgun and semi-automatic rifle.

CNN reported he was employed as a private security guard for a major Florida firm that was sometimes used by the U.S. government.

Mateen may have had “radical influences” toward Jihadist ideology, but the shooter’s father told MSNBC that the mass killing has nothing to do with religion, and may have been a hate crime.

“This had nothing to do with religion… but he got really angry when he saw two men kissing in downtown Miami,” the father reportedly said.

Mateen reportedly “came on the fed’s radar three years ago.”