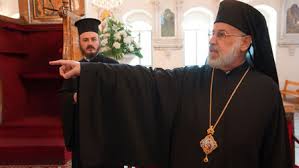 Auxiliary Bishop at the Greek Orthodox Patriarchate of Antioch and All the East Luqa al-Khoury declared war on the Syrian rebels by calling on the Christians to carry arms to defend Syria and its its churches and monasteries.

“Our men are ready and their fingers are on the trigger.” He warned the rebels

Christian places of worship are being subject to attacks by Syrian rebels, drawing international condemnation against the vandalism of religious sites.

On Monday, 13 nuns were reported missing from Maalula north of Damascus after rebel forces, including jihadists, seized control of the Christian town.

Pope Francis called Wednesday for prayers for the nuns missing from the Greek Orthodox Mar Takla convent in Maalula and “for all kidnap victims in the conflict.”