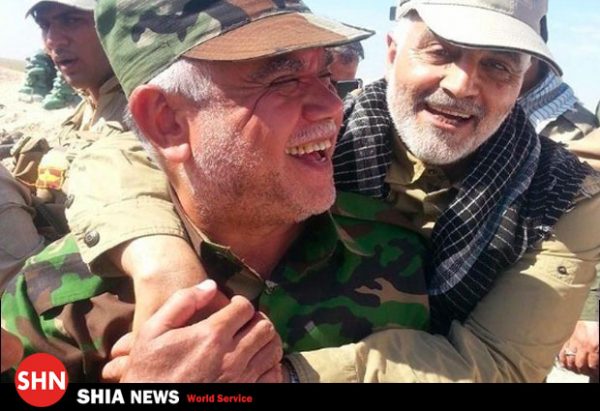 Hadi Al-Amiri , leader of the largest Iranian backed Shiite militia in Iraq the Popular Mobilisation Forces (PMF), , is shown with Iran’s Gen. Qassem Soleimani who heads up all the Shiite militias outside Iran, the Quds Force. Amiri is the preferred candidates of Iran
Share:

The leader of the largest Iraqi Shi’ite paramilitary group has criticized a lack of “precise planning” in war operations to capture Falluja, the stronghold of Islamic State near Baghdad.

Hadi al-Amiri’s comments, in an interview with Al-Sumaria TV on Sunday, make him the second Shi’ite militia leader to voice dismay at efforts launched on May 23 by Prime Minister Haider al-Abadi to dislodge the ultra-hardline Sunni militants from Falluja, 50 km (32 miles) west of the Iraqi capital.

“Unfortunately there is an absence of precise planning for the military operations,” said Amiri, the leader of the Badr Organization, the largest component of the Popular Mobilization, a coalition of Shi’ite militias that came together two years ago to fight Islamic State with support from Iran.

On Friday, a spokesman for Asaib Ahl al-Haq, Jawad al-Talabawi, said the operations had come to a near standstill and asked Abadi to order the resumption of attacks.

Popular Mobilization has been fighting alongside the army in Falluja. Army units are also receiving air support from the U.S.- led coalition.

Abadi said on June 1 the army had slowed its offensive over fears for the safety of tens of thousands of civilians trapped in the city with limited access to water, food and healthcare.

But Amiri accused the authorities of moving military assets away from Falluja, to the frontlines of Mosul, Islamic State’s de facto capital in northern Iraq.

Several calls to the Iraqi military spokesman since Sunday evening went unanswered. A government spokesman declined to comment. Under the Iraqi Constitution, Abadi is the commander-in-chief of the armed forces.

“I believe that sending a large part of armored vehicles and assets to Makhmour, under the pretext of Mosul’s battle, is a betrayal to the battle of Falluja,” Amiri said, referring to a region in northern Iraq.

“Today the military planning and American pressure are aiming to have this major operation conducted in parallel with the operation of liberating Mosul.

“We say to them, ‘Whether you helped us or not, we will win the battle of Falluja,'” he added. A spokesman of the U.S.-led coalition did not reply to an email seeking comment and could not be reached by telephone. The coalition said two weeks ago it was providing air support to Iraqi government forces only.

Abadi ordered the offensive on Falluja after a series of bombings claimed by Islamic State hit Shi’ite districts of Baghdad, causing the worst death toll this year.

Falluja would be the third major city in Iraq recaptured by the government after former dictator Saddam Hussein’s home town Tikrit and Ramadi, the capital of Iraq’s vast western province of Anbar.

Abadi has expressed hope that 2016 will be the year of “final victory” over Islamic State, with the capture of Mosul, their de facto capital in northern Iraq.