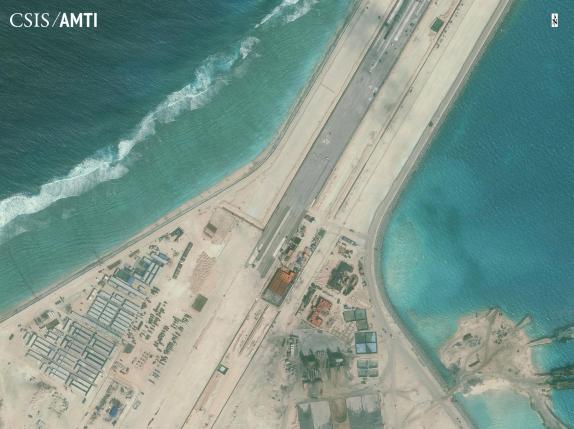 Taiwan’s new defense minister said on Monday the island would not recognize any air defense zone declared by China over the South China Sea, as the island’s top security agency warned such a move could usher in a wave of regional tension.

U.S. officials have expressed concern that an international court ruling expected in coming weeks on a case brought by the Philippines against China over its South China Sea claims could prompt Beijing to declare an air defense identification zone, or ADIZ, as it did over the East China Sea in 2013.

China claims most of the South China Sea, through which $5 trillion in ship-borne trade passes every year. The Philippines, Vietnam, Malaysia, Taiwan and Brunei have overlapping claims, as well as close military ties with Washington.

“We will not recognize any ADIZ by China,” Taiwan Defence Minister Feng Shih-kuan told lawmakers in parliament.

China, which considers Taiwan a breakaway province, drew condemnation from Japan and the United States when it imposed its ADIZ, in which aircraft are supposed to identify themselves to Chinese authorities, above the East China Sea.

China has neither confirmed nor denied it plans such a zone for the South China Sea, saying that a decision would be based on the threat level and that it had every right to set one up.

“In the future, we don’t rule out China designating an ADIZ. If China is on track to announce this, it could usher in a new wave of tension in the region,” Taiwan’s National Security Bureau said in a report presented to parliament.

Chinese Foreign Ministry spokesman Hong Lei, asked whether China would set up an ADIZ for the South China Sea, said many factors needed consideration, especially the level of threat faced in the air.

“Many countries have set up ADIZs. This has nothing to do with various countries’ territorial or maritime rights issues,” he told a daily news briefing, without elaborating.

Speaking at the beginning of a high-level strategic dialogue in Beijing on Monday, Kerry said he would make it clear the United States was looking for a peaceful resolution to disputes in the South China Sea.

“The only position we’ve taken is, let’s not resolve this by unilateral action, let’s resolve this through rule of law, through diplomacy, through negotiation, and we urge all nations to find a diplomatic solution rooted in international standards and rule of law,” he said.

China has been angered by what it views as provocative U.S. military patrols close to islands China controls in the South China Sea. The United States says the patrols are to protect freedom of navigation.

Taiwan’s defense ministry said in its own report it would strengthen its defenses on Pratas Island, in the north of the South China Sea, and on Itu Aba in the disputed Spratly Islands.

Feng told lawmakers Taiwan would send additional ammunition to Itu Aba for its anti-aircraft guns in the next month. The move is largely symbolic as the guns are not considered advanced weaponry.

The ministry said China was building up its military presence in the South China Sea with deployments of anti-missile systems, drones and fast missile ships in the area.