U.S.-backed force closes in on Islamic State-held city of Manbij in Syria 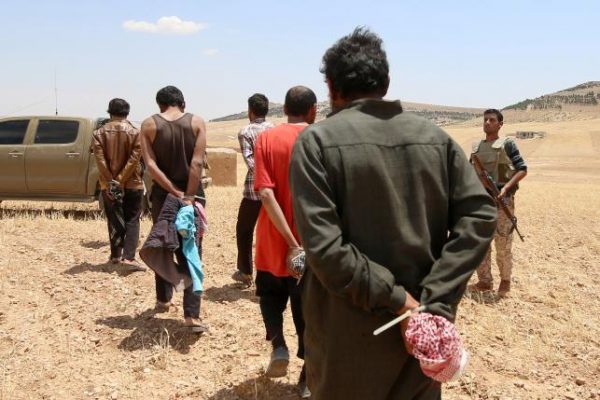 Men, who the Democratic Forces of Syria fighters claimed were Islamic State fighters, walk as they are taken prisoners after SDF advanced in the southern rural area of Manbij, in Aleppo Governorate, Syria May 31, 2016. REUTERS/Rodi Said
Share:

U.S.-backed Syrian fighters have surrounded the Islamic State-held city of Manbij from three sides as they press an offensive against the jihadists near the Turkish border, a spokesman for the fighters said on Monday.

The Syria Democratic Forces (SDF), including the powerful Kurdish YPG militia and Arab allies, launched the attack last week with the ultimate aim of dislodging Islamic State from its last foothold at the Syrian-Turkish frontier.

The Syrian Observatory for Human Rights, a Britain-based group that reports on the war, said the U.S.-backed forces had cut the road north from Manbij to Islamic State-held Jarabulus at the Turkish border, which is also expected to be targeted.

Sharfan Darwish, spokesman for the Manbij Military Council, said the U.S.-backed alliance had advanced to within 6 km (4 miles) of Manbij, and the attack backed by U.S. special forces was going to plan. Over 150 jihadists had been killed, with 50 of the bodies in SDF hands, he said.

“If we had wanted to reach (Manbij) before this time, or if we wanted to arrive directly, we could have, but as you know the area is vast and there are a large number of civilians,” he said. “Our forces are surrounding Manbij from three directions.”

He said there were dead among the SDF and the number would be announced later. They included the commander of one of the groups, Faysal Abu Layla of the Sun of the North Battalions. He had died of wounds caused by a mortar bomb.

The Syrian Observatory for Human Rights said the attacking forces were less than 4 km from Manbij at the closest point. Its director, Rami Abdulrahman, said 56 IS members had been killed so far, and 19 SDF fighters had died.

“Manbij will fall, but the time frame is linked to events and developments,” Darwish said.