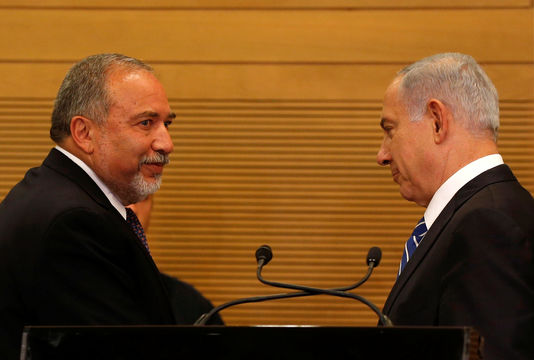 Israeli Prime Minister Benjamin Netanyahu held out the prospect on Monday of reviving a 2002 Arab peace initiative that offers Israel diplomatic recognition from Arab countries in return for a statehood deal with the Palestinians.

Netanyahu’s comments were a formal response to a speech last week by Egyptian President Abdel Fattah al-Sisi, who promised Israel warmer ties if it accepted efforts to resume peace talks.

“The Arab peace initiative includes positive elements that can help revive constructive negotiations with the Palestinians,” Netanyahu said, echoing comments he made a year ago to Israeli reporters.

“We are willing to negotiate with the Arab states revisions to that initiative so that it reflects the dramatic changes in the region since 2002 but maintains the agreed goal of two states for two peoples,” he added.

His comments were made also in English in a speech that was mostly in Hebrew – a device Netanyahu often uses when he wants to make a statement to the international community.

Lieberman concurred and Netanyahu appeared to indicate that the new far-right defense minister’s inclusion in the government did not spell an end to peace efforts with the Palestinians.

The original Arab plan offered full recognition of Israel but only if it gave up all land seized in the 1967 Middle East war and agreed to a “just solution” for Palestinian refugees.

But in 2013, after the initiative’s terms were softened to include possible land swaps between Israel and the Palestinians, Netanyahu signaled a readiness to consider it.

Previous attempts to engage the adversaries have come to nought. The Palestinians say Israeli settlement expansion denies them a viable state they seek in the occupied West Bank, the Gaza Strip and a capital in Arab East Jerusalem.

Israel has demanded tighter security measures from the Palestinians and a crackdown on militants who have attacked or threaten the safety of Israeli citizens.

In the last half year, Palestinian attacks have killed 28 Israelis and two visiting U.S. citizens. Israeli forces have shot dead at least 195 Palestinians, 134 of whom Israel has said were assailants. Others were killed in clashes and protests.

France is set to host a peace conference of to revive peace efforts on June 3 with the participation of ministers from the Middle East Quartet – the United States, Russia, the European Union and the United Nations – the Arab League, the U.N. Security Council and about 20 countries.

Neither Israel, which has opposed the gathering, nor the Palestinians, who have welcomed it, have been invited.

The Arab ministers were expected to adopt a resolution on the plan to revive negotiations between Israel and president Mahmud Abbas’s Palestinian Authority.

The Arab foreign ministers decided to welcome the French initiative and France’s attempt to encourage both Israeli and Palestinian factions to the negotiations table.