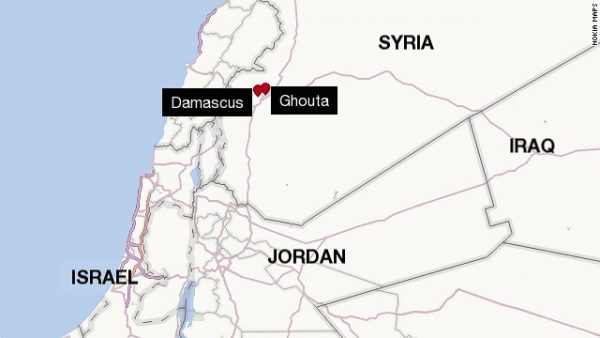 Syrian government forces and allies including Lebanese Hezbollah fighters seized an extensive area southeast of Damascus from rebels on Thursday and fought other insurgents near a highway leading southwest, a monitoring group said.

The advance is part of a wider escalation in fighting that has accompanied failed diplomatic efforts to end the five-year conflict. Syria’s war has killed 250,000 people, created the worst refugee crisis since World War II, allowed for the rise of Islamic State and drawn in many regional and global powers.

The Syrian Observatory for Human Rights said it was one of the most significant government advances this year, after its forces took territory in northwestern and central Syria. Insurgents have also advanced in some areas recently, including in Aleppo province.

Hezbollah’s Al Manar television said the fighting in Damascus’s Eastern Ghouta suburbs was part of a new military operation by the Syrian army against the rebels.

The fighting began early on Thursday when government forces and Hezbollah fighters captured the town of Deir al-Asafir, and then seized a number of other areas nearby, closing off a pocket of rebel control in Eastern Ghouta, the British-based Observatory said.

The region has long been held by rebels. Most of Eastern Ghouta is still in rebel hands, but Thursday’s gains could pave the way for further government and Hezbollah advances there, Observatory director Rami Abdulrahman said.

Government forces and their allies have recently sought to exploit rebel infighting in areas east of the Syrian capital. The insurgents have failed to halt that violence despite attempts at mediation.

On Thursday hundreds of families fled Deir al-Asafir because of the intensity of the clashes between the government side and the rebels, the Observatory said.

Hezbollah fighters played a key role in the assault, Abdulrahman said, which took place near to where the group’s top military commander in Syria was recently killed by what it said was rebel shellfire.

Separately, southwest of Damascus, the Syrian army and its allies pressed attacks to try to shore up control of a main highway running from the capital to southwestern Syria, including Quneitra province and the Golan Heights, the Observatory said.

Government forces have carried out dozens of air raids around the town of Khan al-Shih, where rebel groups control areas straddling the highway, it said.

Capture of Khan al-Shih would help secure control of the road, Abdulrahman said.

The Syrian army said in a video report that rebels attacked the area first, and had been beaten back and driven from some of their positions by government forces. The Observatory did not immediately report significant advances.

The fighting raged despite international attempts to revive a wider ceasefire in western Syria and restart peace talks.

Fighting continues elsewhere in western Syria, including in Aleppo and Latakia provinces, and Islamic State is engaged in battles farther east separately against government forces, Kurdish fighters and a U.S.-led air campaign.