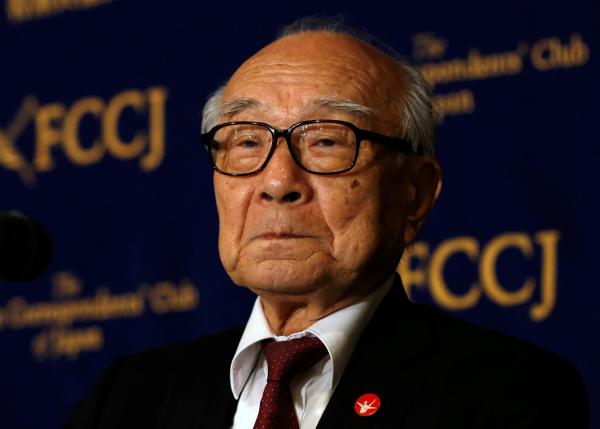 Terumi Tanaka, a survivor of the atomic bombing and head of a national organisation of bombing survivors called Nihon Hidankyo, attends a news conference at the Foreign Correspondents’ Club of Japan in Tokyo, Japan, May 19, 2016. REUTERS/Issei Kato
Share:

Japanese atomic bomb survivors say an apology from President Barack Obama for the U.S. bombing of Hiroshima would be welcome, but their priority is on ridding the world of all nuclear weapons forever.

Obama, who in 2009 was awarded the Nobel Peace Prize partly for making nuclear nonproliferation a centerpiece of his agenda, will on May 27 become the first incumbent U.S. president to visit Hiroshima, site of the world’s first atomic bombing on Aug. 6, 1945.

The city of Nagasaki was bombed three days later.

Obama’s visit to Hiroshima, after he attends a meeting of G7 leaders in Tokyo, was hotly debated in the White House, with concern it would be criticized in the United States if it was seen as an apology.

Most Japanese feel the bombings of Hiroshima and Nagasaki were unjustified. Many in the United States say the bombings shortened the war and saved the lives of numerous U.S. servicemen.

Terumi Tanaka, a native of Nagasaki who was 13 when the bomb hit, said on Thursday an apology for the human suffering would be welcome. Though he was unharmed, he vividly recalls searching the blackened city and piles of bodies for family members.

“We would definitely like an apology to people who lost their lives, those who lost loved ones, parents who lost their children,” Tanaka, who heads a national organization of bombing survivors, told a news conference.

But insisting on a broad apology risked interfering with the ultimate goal of nuclear disarmament, he said.

“The strongest feeling of survivors is that this should not become a barrier to getting rid of nuclear weapons,” he said.

Japan surrendered six days after the bombing of Nagasaki.

Toshiki Fujimori, who was a baby on his mother’s back when the two of them were bowled over by the blast wave from the Hiroshima bomb, said he sensed efforts were being made to dampen talk of an apology in advance of Obama’s visit.

“What I mean is, there has been pressure applied to create a mood in which he can visit,” he said.

Hiroshima governor Hidehiko Yuzaki said Obama’s visit was stirring a range of emotions in survivors but they were mostly putting hope for nuclear disarmament first.

“Their biggest wish is that they don’t want anybody to go through this again,” he told Reuters.

“In order to carry this out, they’ll put the issue of an apology to the side for now.”