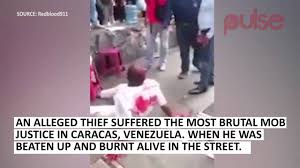 The mob didn’t know at first what Roberto Bernal had done, but he was running and that was enough.

Dozens of men loitering on the sidewalk next to a supermarket kicked and punched the 42-year-old until he was bloodied and semi-conscious. After all, they had been robbed of cell phones, wallets and motorcycles over the years, and thought Bernal had a criminal’s face.

Then a stooped, white-haired man trailing behind told them he’d been mugged.

The mob went through Bernal’s pockets and handed a wad of bills to the old man: The equivalent of $5. They doused Bernal’s head and chest in gasoline and flicked a lighter. And they stood back as he burned alive.

“We wanted to teach this man a lesson,” said Eduardo Mijares, 29. “We’re tired of being robbed every time we go into the street, and the police do nothing.”

Vigilante violence against people accused of stealing has become commonplace in this crime-ridden country of 30 million, once one of the richest and safest in Latin America.

Reports of group beatings now surface weekly in local media. The public prosecutor opened 74 investigations into vigilante killings in the first four months of this year, compared to two all of last year. And a majority of the country supports mob retribution as a form of self-protection, according to polling from the independent Venezuelan Violence Observatory.

The revenge attacks underscore how far Venezuela has fallen, with the lights flickering out daily, and food shortages fueling supermarket lines that snake around for blocks. As the plunging price of oil has laid bare years of mismanagement, the economy has come apart, and with it, the social fabric.

Venezuela now has one of the highest murder rates in the world, and it’s hard to find a person who hasn’t been mugged. In the general haze of violence, Bernal’s killing didn’t stand out enough to make the front pages or provoke comment from local politicians.

“Life here has become a misery. You walk around always stressed, always scared, and lynching offers a collective catharsis,” Violence Observatory director Roberto Briceno-Leon said. “You can’t do anything about the lines or inflation, but for one moment, at least, the mob feels like it’s making a difference.”

Bernal lived his whole life in a maze of narrow staircases and cheerfully-painted cinderblock shacks built into the hills above Caracas. This kind of slum is home for about half of Venezuelans, who are bearing the brunt of the country’s collapsing economy.

The shantytowns draped over Caracas have not seen running water for months, and residents have begun raiding passing trucks for food. Bernal had been out of work, and recently confided in his siblings that he and his wife were struggling to feed their three children. He wanted to find a way to move to Panama.

A quiet man with a muscular build from his time in the army, Bernal spent the days before his death presiding over his sister’s kitchen, preparing Easter stews and candied passion fruit. He chuckled softly when he won at dominos.

His six siblings thought of him as the one who made it, attending a cooking school and becoming a professional chef. He liked to turn on the TV as soon as he got home from work, and would leave the room at the first sign of an argument. Many people who grow up deep in the slums assimilate some parts of street culture, sporting tattoos or cocked baseball caps, but not Roberto.

“He was so on the straight and narrow, he didn’t even have a nickname,” his aunt Teresa Bernal said.

A regular church-goer who often sent around religious text messages, Bernal set his relatives’ phones dinging the night before the burning with a series of prayers for God to fill their day with blessings.

That morning, he left the family’s windowless shack before dawn and walked into an acrid smog that had descended over the city from grass fires in the mountains above. He took a twisting bus ride out of the slum, dropped his daughter at school, then boarded the metro.

By the time he emerged next to a bustling thoroughfare near the center of town, fat blue and gold macaws were crisscrossing overhead. He walked past security guards sitting outside sparsely-stocked shops and apartment buildings protected by the electric fencing that denotes a middle-class Caracas neighborhood.

Bernal had told his wife he was on his way to a new job at a restaurant. But he stopped near a bank beneath a billboard advertising door-to-door delivery of scarce goods from Miami, a three-hour flight away.

A man in his 70s walked out, tucking a stack of bills worth $5 into a hat that he then hid in his jacket.

It would have been a lot of money for Bernal. It could have bought his family a week’s worth of food. Or a plastic dining table. Or a proper school uniform for his daughter, whom the other kids were calling “stinky.”

Bernal grabbed the cash and started running toward a taxi line where dozens of motorcycles were parked, the robbery victim later told investigators. The man pursued him, crying “thief!” People watching from a distance assumed they were racing to get in line to buy groceries.

In the meantime, the motorcycle drivers were sitting on a low wall in front of the supermarket, fiddling with cracked cellphones and drinking coffee from small plastic cups. They watched the pair come toward them.

When the beating began, workers at the curbside candy stalls and hotdog stands left their booths, not wanting to see what was coming. Other people stayed to watch and cheer.

Someone had the idea to siphon gasoline from a motorcycle tank into a soda bottle. As the smell of burning flesh filled the air, the crowd’s shouting turned to silence. Some onlookers took cellphone video of Bernal trying to stand as tall flames consume his head.

He would likely have died there, begging for water to quench the fire in the middle of some two dozen onlookers, if not for Alejandro Delgado. The youth pastor arrived for his part-time job as a motorcycle taxi driver just as the frenzy was reaching its peak. Horrified, Delgado whipped off his dusty black jacket and smothered the flames.

“These guys I work with every day had turned into demons,” he said. “I could hear the man’s flesh crackling and popping. When I put the fire out, they threw bottles at my head.”

Bernal was taken away in an ambulance on a cross-city quest to find a hospital with enough medical supplies to deal with his injuries. The videos spread across social media, but they drew curiously little condemnation. Even the trauma nurse who attended to Bernal thought a form of justice had been carried out.

“If the people grabbed him and lynched him, it’s because he was a thug,” said nurse Juan Perez, who has himself been robbed too many times to count.

When Bernal’s wife got the call, she assumed he had been burned at work. Arriving at the hospital, she walked right past his charred body, and then doubled back to ask, “Are you Roberto?”

His eyes had been seared shut, and his trachea was so scorched that he could only speak in whispers. He told her that the old man had mistaken him for the real thief, and his accusers had not given him time to explain. He died two days later.

His murder was not the first in his family. A cousin was shot when he spooked a home intruder, and a nephew was killed last year in a domestic abuse case.

And it was far from the only attack in the neighborhood.

Elisa Gonzales, 59, watched the mob beat Bernal from her window. Later that night, she spied another group of men kicking another alleged thief in the head.

“It makes me sick to see this stuff. I don’t go downstairs anymore,” she said.

Police tend to approach mob violence like bartenders dealing with a fistfight; they’ll sometimes step in to break it up, but aren’t going to spend much time looking into how it got started. Officers say they intervened in 9 such cases in this neighborhood during the first three months of this year, compared to 18 cases for all of 2015.

Increasingly under attack themselves, police recently put up a thick brick wall around their station here. In the weeks after the killing, the taxi drivers who beat Bernal joked that they were waiting for officers to come by to ask for money and then go back to their bunker.

Nationwide, police used to make 118 arrests for every 100 murders, according to the Violence Observatory; now they make eight. Robberies and thefts are so rarely investigated that most victims don’t bother to file a report, government surveys have found.

Bernal’s family was desperate for his case to be different. They began making regular trips to the prosecutor’s office, toting mementos of Saint Anthony, patron of the poor. They hoped their presence would shame officials into holding someone accountable for the April 4 murder.

To their surprise, it did.

“We have to prioritize cases,” explained public prosecutor Regino Cova. “It really matters when a family comes every day like, ‘please, please, please.'”

A month after Bernal’s death, Cova charged 23-year-old law school dropout Maickol Jaimez with pouring the gasoline. He told the family that the other men who appeared in the video would now be off the hook. Overwhelmed by a murder rate on par with a war zone, prosecutors can’t afford to chase after people for getting in a few kicks, he said.

Jaimez lived in the same hillside slum as Bernal and worked next to the supermarket guarding shoppers’ parked motorcycles, one of the many security-related jobs that have proliferated amid the violence. Like Bernal, he had never been in trouble with the law before. But co-workers say he’d been upset lately because people had been stealing helmets and motorcycle batteries, and he’d had to pay.

He told prosecutors they will never be able to convict him because no clear shot of his face appears in the video.

He could be right. Last year, the state charged 268,000 people with crimes ranging from robbery to murder; a threefold increase from the year before. But only 27,000 were found guilty.

Bernal’s blood still stains a motorcycle taxi sign above the cracked sidewalk where he was burned. The men here say they won’t wash it off; it’s their trophy from the time they stood up to one of the criminals who have made city life a cauldron of stress and fear.

“People can try to make us look bad,” said Francisco Agro, 29, a taxi driver who participated in the beating. “But the truth is, the courts, the police, they don’t work. It’s not the way things should be, but it fell to us to protect an old man from a thug.”

Bernal’s widow and children have been sleeping huddled together since the murder, afraid someone might come for them, too. His 11 year-old son has stopped going to school and is spending more time with the older kids in the slum’s dirt alleys, wearing fake tattoos on his spindly arms.

The family still does not believe Bernal robbed anyone, but they agree with his killers on one point: There is no justice here.

“Everyone needs to be scared,” said his nephew, Alfredo Cisneros. “People need to know there is no law here anymore. No one is safe.”