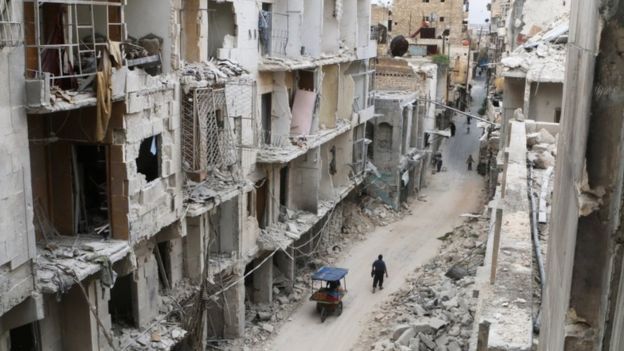 Air strikes on a camp housing Syrians uprooted by war killed at least 28 people near the Turkish border on Thursday, a monitoring group said, and fighting raged in parts of northern Syria despite a deal to cease hostilities in the city of Aleppo.

The Syrian Observatory for Human Rights said the dead included women and children and the death toll from the air strikes, which hit a camp for internally displaced people near the town of Sarmada, was likely to rise.

Footage shared on social media showed rescue workers putting out fires which still burned among charred tent frames, pitched in a muddy field. White smoke billowed from smoldering ashes, and a burned and bloodied torso could be seen in the footage.

“There were two aerial strikes that hit this makeshift camp for refugees who have taken refuge from fighting in southern Aleppo and Palmyra,” said Abu Ibrahim al-Sarmadi, an activist from the nearby town of Atmeh who spoke to people near the camp.

Nidal Abdul Qader, an opposition civilian aid official who lives about 1 km (half a mile) from the camp, said around 50 tents and a school had burned down.

United Nations aid chief Stephen O’Brien said he was horrified and sickened by what had happened and called for an investigation.

“If this obscene attack is found to be a deliberate targeting of a civilian structure, it could amount to a war crime,” O’Brien said in a statement. “I call for an immediate, impartial and independent investigation into this deadly incident.”

The White House said the victims were innocent civilians who had fled their homes to escape violence.

Sarmada lies about 30 km (20 miles) west of Aleppo, where a cessation of hostilities brokered by Russia and the United States had brought a measure of relief on Thursday.

But fighting continued nearby and President Bashar al-Assad said in a telegram to Russian President Vladimir Putin his army would not accept anything less than “attaining final victory” and “crushing the aggression” by rebels in Aleppo, according to state media.

“We call on Russia to urgently address this totally unacceptable statement,” U.S. State Department spokesman Mark Toner told a briefing. “It’s clearly an effort by Assad to push his agenda, but it is incumbent on Russia to assert influence on that regime to maintain the cessation of hostilities.”

Toner sought to address confusion over the timeline for the cessation of hostilities, with Syrian state media saying the army would abide by a “regime of calm” in Aleppo for 48 hours and the State Department emphasizing it was open-ended.

Russia blocked a British-drafted U.N. Security Council statement, which would have condemned the surge in violence in Aleppo and attacks against civilians.

“There is one country that could not agree it and it’s Russia,” Britain’s U.N. Ambassador Matthew Rycroft told reporters. “That does speak volumes about their support for protection of the Assad regime.”

The army blamed Islamist insurgents for violating the agreement overnight, saying they had shelled government-held residential areas of Aleppo indiscriminately. Residents said the violence eased by morning and more shops opened up.

Heavy fighting was reported in the southern Aleppo countryside near the town of Khan Touman, where al Qaeda’s Syrian branch Nusra Front is dug in close to a stronghold of Iranian-backed militias, a rebel source said.

Rebels were attacking government positions around the town and government forces carried out air attacks on the area, pro-Syrian government television channel Al-Mayadeen and the Observatory said.

In the east of the country, Islamic State militants captured the Shaer gas field, their first gain in the Palmyra desert area since they lost the ancient city in March, according to rebel sources and a monitor.

The British-based Observatory and a resident reported rebel shelling of the government-held side of Aleppo, which was Syria’s commercial hub and largest city before the war.

But a resident of the rebel-held eastern part of the city said that although warplanes flew overnight, there were none of the intense raids seen during the past 10 days. People in several districts ventured onto the streets.

A rebel source also said that despite intermittent firing across the city’s front lines, fighting had subsided and no army shelling of residential areas had been heard.