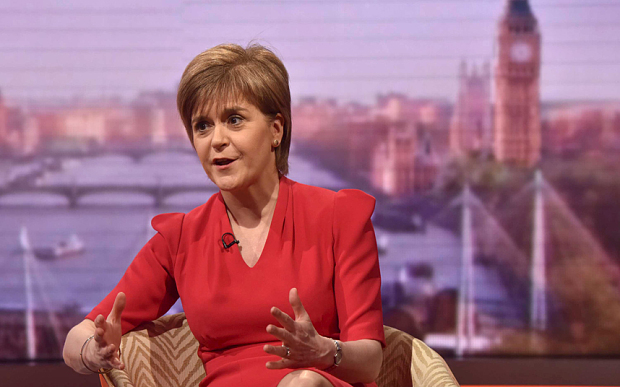 Though the SNP failed to hang on to its majority, leader Nicola Sturgeon dubbed it an “historic” win for the party as it seeks a mandate to move towards a second independence referendum.

Elsewhere, some counts were expected to stretch into the weekend as 45 million eligible voters were asked to cast their ballots in contests across England, Wales, Scotland and Northern Ireland.

The results of local elections were already emerging early Friday, while the outcome of the vote for a new mayor of London to replace Conservative Boris Johnson was expected later in the day.

Labour lawmaker Sadiq Khan, a former government minister and son of a bus driver from Pakistan, is tipped to beat Conservative multimillionaire environmentalist Zac Goldsmith to become the first Muslim mayor of the British capital.

The voting day dubbed “Super Thursday” came after a bitter few weeks of political sniping between the Conservative party of Prime Minister David Cameron and Labour.

Corbyn set up an inquiry into anti-Semitism and racism in Labour after former London mayor Ken Livingstone was suspended from the party for claiming Nazi dictator Adolf Hitler supported Zionism.

With results in from 78 out of 124 councils in England, Labour has suffered losses though they were not as bad as expected, damping down talk of a potential leadership challenge to Corbyn.

Cameron is also grappling with deep splits in his party ahead of the June 23 referendum on Britain’s membership of the European Union.

Retired head teacher Mary White, 66, said that for her the biggest issues in the London mayoral election were “housing and transport”.

“I don’t think that any of the candidates have a magic solution so it’s incredibly difficult to chose between them,” White said as she voted in London.

The mayoral campaign has been ugly, with Khan forced to deny support for Islamic extremists and Goldsmith rejecting claims of playing on voters’ religious prejudices.

But many Londoners were more concerned with concrete issues such as health and wages.

“Muslim or non-Muslim, it doesn’t… matter for the community,” said 57-year-old Koyruz Zoman, a Muslim cook from Whitechapel in the ethnically diverse East End.

“Whoever comes in, we want what they’ve promised.”

Twelve candidates are standing for mayor of London but polls point to a straight fight between Khan and Goldsmith, with the former between 12 and 14 points ahead.

If the polls are correct, Khan would become the first Muslim mayor of an EU capital.

The two men come from very different backgrounds. Khan, 45, grew up in social housing and worked as a human rights lawyer before entering politics, while Goldsmith, 41, is the son of the late tycoon financier James Goldsmith.

Khan has dismissed attempts to link him with Islamic extremists as “desperate stuff”, but Cameron repeated the claims in angry clashes with Corbyn in parliament on Wednesday.

Cameron said Khan had shown a “pattern of behaviour” in appearing publicly alongside people such as Sajeel Shahid, “the man who trained the ringleader of the 7/7 attacks (in London).”

In Scotland, the SNP won 63 out of 129 seats, enough to secure a third term in government but two seats shy of the 65 needed for a majority, meaning it will need to form a coalition with one of the smaller parties such as the Greens.

Nevertheless, SNP chief and First Minister Sturgeon, speaking before the final results were announced, said the party had “made history”.

“What is now beyond doubt is that the SNP has won a third consecutive Scottish Parliament election,” she said.

Sturgeon has said June’s referendum on Britain’s EU membership could fuel calls for another independence vote if Britain as a whole elects to leave the EU but Scotland votes to stay in.

Scotland rejected independence at a referendum in 2014.

The Conservatives won 31 seats to become the main opposition party in Scotland, a major victory in a country where they have been deeply unpopular since Margaret Thatcher’s premiership in the 1980s.

Labour were pushed into third with 24 seats.

In Wales, polls put Labour on course to retain its dominance in the Welsh Assembly, with the Conservatives and nationalists Plaid Cymru vying for second place.

In Northern Ireland, the delicate balance in the power-sharing executive set up after decades of sectarian violence also looks set to continue.