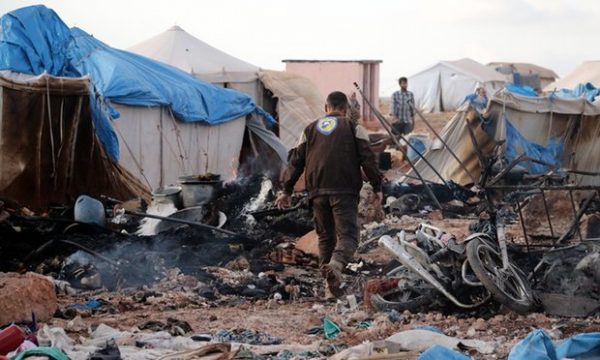 The aftermath of the bombing of the al-Kammouneh refugee camp in Syria. Photograph: Anadolu Agency/Getty Images
Share:

France is expressing the “strongest condemnation” of the air strikes on camps for displaced people in Syria that left at least 28 people dead, including women and children.

A statement from the Foreign Affairs Ministry on Friday said the bombings “could be constitutive of a war crime and a crime against humanity” and that France wants an independent investigation into this “odious act.”

The statement attributed the bombings to the Syrian government and insisted those who carried out the “revolting and unacceptable” attacks must be brought to justice.

France’s Foreign Minister Jean-Marc Ayrault will meet on Monday in Paris with Riad Hijab, the head of the Western-backed Syrian opposition’s

The U.N. human rights chief is also condemning as “murderous attacks” the air strikes on camps .

Zeid Ra’ad al-Hussein said Friday that the bombings a day earlier in Sarmada, in a rebel-held area near Syria’s northwestern border with Turkey, appeared to be evidence of “a particularly despicable and calculated crime.”

Zeid said: “It is hard to find any more words to describe the horror” facing Syrian civilians, noting they have been tortured in prisons, subjected to xenophobia in Europe, and bombed and killed in homes, hospitals, camps and the streets.

Activists say a coalition of Syrian rebels and hard-line jihadists have seized a strategic village from pro-government forces just 6 kilometers (4 miles) from the contested city of Aleppo.

The Britain-based monitoring group The Syrian Observatory for Human Rights says at Friday that least 43 insurgents and 30 pro-government fighters died in the battle for Khan Touman.

The offensive signals the reemergence of the powerful Jaish al-Fatah, or Army of Conquest, jihadist coalition in the conflict. It is made up predominantly of militants from al-Qaida’s Syria Affiliate, the Nusra Front, and other ultraconservative factions. The Observatory says other non-jihadist rebels fought for Khan Touman on the side of the coalition, too.