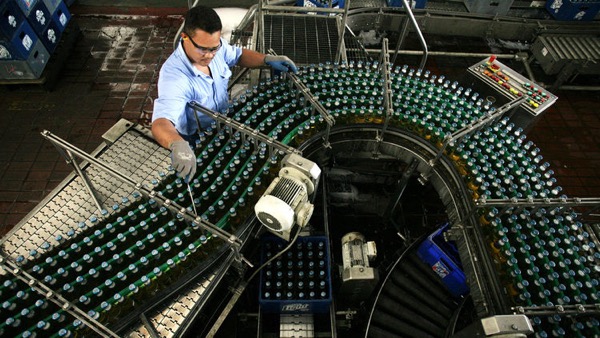 A worker at the production line of beer brewery Polar in San Joaquin, Carabobo state, 100 miles West from Caracas. Polar Group is the largest private corporation of Venezuela, and also the largest supplier of food and drinks of the country. Te company said Wednesday that it will be forced to stop producing beer because it can’t get the foreign currency it needs to purchase malted barley. Photographer Diego Giudice/Bloomberg News
Share:

The political confrontation in Venezuela turned even more depressing Friday morning, when Venezuela’s state owned electricity company Corpoelec interrupted power to the National Assembly, hours after President Nicolas Maduro threatened to do so in a live television broadcast.

“I am going to cut off the lights at the National Assembly”, Maduro said before the lights went out. The interruption affected homes and offices around the parliament, located in densely-populated downtown Caracas, according to opposition lawmaker Jesus Yanez.

National Assembly President Henry Ramos Allup tweeted: “they should cut off the power at the headquarters of corruption and inefficiency, Miraflores,” the Venezuelan Presidential Palace.

Blackouts and brownouts in Venezuela are extremely common, due to corruption, poor maintenance and a severe drought that has badly hurt hydroelectric plants, the source of about 65% of all Venezuelan electricity, analysts have told LAHT.

The interruption in service is the latest blow in a dynamic of escalation by Maduro against the opposition that began December 6th 2015, when the opposition attained the first super majority (more than two thirds) ever in Venezuela legislative history at the National Assembly. During the same TV address, Maduro promised to draft a decree nullifying all laws coming out of the National Assembly.

Since December 6th, the opposition has managed to get some crucial punches in but Maduro has countered using the Supreme Court, in a never-before-seen confrontation between powers.

Saturday morning, opposition leader Governor Henrique Capriles Radonski announced that the Opposition had collected 10 times the minimum amount of signatures needed to initiate a recall vote against Maduro, with 2 million so far.

The opposition collected 1.1 million signatures in 48 hours, when it had 30 days to collect less than 200,000 signatures. Getting the CNE electoral authority to authorize a form to collect the signatures on Tuesday was, in itself, a victory of the opposition, but there have been more.

On Thursday Rodolfo Marco Torres, a former general in the Venezuelan Army, became the first cabinet member to be sacked by the super majority in the National Assembly. Marco is also the first cabinet member to receive a censorship vote with the present parliamentary system, which began in 1999. He will be automatically removed from the post (under the Venezuelan Constitution) and barred from holding cabinet posts or the vice presidency during the rest of Maduro’s present term.

This week a delegation from Venezuela’s National Assembly hand-delivered a letter to Organization of American States Secretary General Luis Almagro in Washington, D.C., asking that the OAS intervene to help resolve the Venezuelan crisis.

On Friday, Jesus “Chuo” Torrealba, the executive secretary of Venezuela’s Opposition alliance, was attacked during a protest against power cuts in Caracas.

NO MORE BEER
Empresas Polar SA, the country’s largest privately-held company and biggest brewer, said Wednesday that it will be forced to stop producing beer because it can’t get the foreign currency it needs to purchase malted barley.

“We haven’t been able to replenish inventory, and we only have malted barley until April 29,” the company said in a statement published on its website. “Because of that, we’re obligated to suspend the production of beer until we get access to the foreign currency necessary to procure the material.”

“Since last year, we’ve been alerting the country to the grave situation we are facing, and we’ve also exhausted all of the options to take on debt with our foreign providers,” the company said. “For Polar to be able to keep making products demanded by Venezuelans, it needs opportune and sufficient access to foreign currency.”