Iran sues US to reclaim its frozen assets 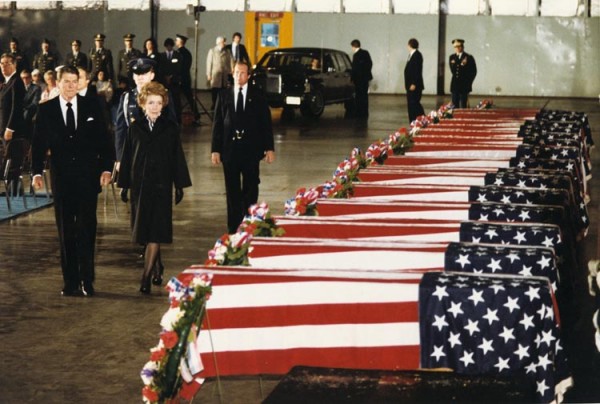 President Ronald Reagan and First Lady Nancy Reagan pay their respects and tribute to the 13 American civilian and 4 U.S. military personnel victims of the 1983 Beirut embassy bombing . Iran and Its proxy Hezbollah were accused of being behind the bombing. The US Supreme Court ruled two weeks ago that Iran must hand over nearly $2 billion in frozen assets to survivors and relatives of those killed in attacks attributed to the Islamic Republic.
Share:
A senior Iranian official said Sunday that Iran has filed a lawsuit against Washington at the International Court of Justice over a US Supreme Court ruling which would transfer over $2 billion in frozen Iranian funds to American victims of terror attacks.

“The government has powerfully stood against the practice of this ruling because these assets belong to the [Iranian] nation and should be spent for its welfare,” Iranian Vice President for Legal Affairs Elham Aminzadeh said on Sunday, according to the Iranian Fars News Agency.

Aminzadeh added that Iran “has filed a lawsuit at the International Court of Justice and is pursuing” legal procedures to reclaim the funds.

Iran threatened last week to turn to the ICJ in The Hague, claiming that the US Supreme Court’s decision amounted to theft.

“We hold the US administration responsible for preservation of Iranian funds and if they are plundered, we will lodge a complaint with the ICJ for reparation,” Iranian Foreign Minister Mohammad Javad Zarif said last week at a joint news conference with his visiting Macedonian counterpart Nicolas Poposki.

The US Supreme Court ruled two weeks ago that Iran must hand over nearly $2 billion in frozen assets to survivors and relatives of those killed in attacks attributed to the Islamic Republic.

These included the 1983 bombing of a US Marine barracks in Beirut and the 1996 Khobar Towers bombing in Saudi Arabia.

The decision affects more than 1,000 Americans.

The official IRNA news agency on Monday cited Zarif as saying in English that if such a ruling were applied, it would be “misappropriation” of Iranian funds.

“We have announced since the beginning that the Iranian government does not recognize the US extraterritorial law and considers the US court ruling to blockade Iranian funds null and void and in gross violation of international law,” he said.

“That a court or judiciary in a corner of the world wants to decide about the Iranian nation’s rights and properties is fully illegal and against international law and the central banks’ legal immunity,” Rouhani said during a cabinet meeting in Tehran, according to Fars.

“The Iranian nation will stand against this incorrect ruling, and the Islamic Republic and its government will use all their power to restore the Iranian nation’s rights,” he added.