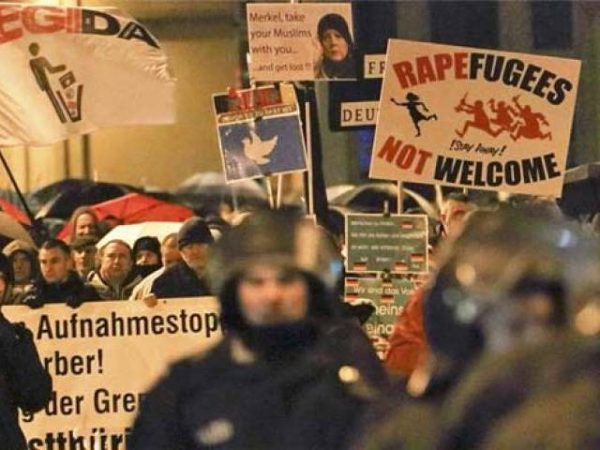 Germany’s upstart Alternative for Germany party on Sunday adopted a clear anti-Islam stance in a platform that lays the foundation for the populist party’s bid to win parliamentary seats in federal elections next year.

The manifesto adopted by members gathered in Stuttgart for a party conference states that “Islam is not a part of Germany” and demands a ban of minarets and the Muslim call to prayer—the clearest move yet by the party to harness widespread concern in Europe’s largest country about steeply rising refugee numbers in recent years.

Founded in 2013, the AfD has surged in popularity amid the migrant crisis, benefiting from growing concerns among Germans over how the country will manage to integrate the more than one million migrants that arrived last year alone.

The party is now represented in eight of 16 German states and scored record votes in three state elections in March with a campaign focused on opposition to Angela Merkel’s open-door migrant policy.

Party leaders now seek to extend that success to next year’s federal elections, presenting the AfD as a “conservative, free and patriotic” party. The aim of the two-day conference was to adopt a 1,700-page election manifesto and bridge deep internal divisions about the party’s political message.

“Our party program is the road to a different Germany,” party chief Jörg Meuthen told the more than 2,000 attendees. The recent success is “just the beginning,” he said.

The meeting was marked by extensive debate about details of the program, highlighting tensions within the party between those who want to broaden its appeal to conservative voters and those who defend more-radical ideas. Members had proposed more than 1,500 amendments to the draft manifesto, including proposals to tone down the chapter on Islam.

One party member stood up to defend a proposal to rephrase the chapter, arguing that it gave the impression the party rejects Islam entirely, which goes against the German constitution. He didn’t win much support.

“Islam is foreign to Germany and for that reason it can’t invoke the principle of religious freedom in the same way as Christianity,” Hans-Thomas Tillschneider, an AfD lawmaker from Saxony-Anhalt responded, earning loud applause.

The manifesto as adopted Sunday states that the party respects freedom of religion but declares minarets, the towers of mosques from which the Muslim call to prayer is made, an “Islamic symbol of power.” The party supported a ban on full-body veils.

Chancellor Angela Merkel in the past has said that Islam belongs in Germany and stressed that Germany’s constitution protects freedom of religion.

But the party—often ostracized by mainstream politicians and the media as dangerously far to the right—sought to distance itself from extremist groups, approving a motion to dissolve the party’s branch in the Saarland after it emerged that some party members there had ties to neo-Nazi groups.

The conference kicked off Saturday with clashes between leftists and police, who temporarily detained more than 400 demonstrators in Stuttgart.

On the second day, chaos reigned as party functionaries tried to sort through hundreds of outstanding program points. It was unclear if the party would be able to adopt the program in full by the end of the conference.