Iranian refugee who set himself on fire dies in Australia 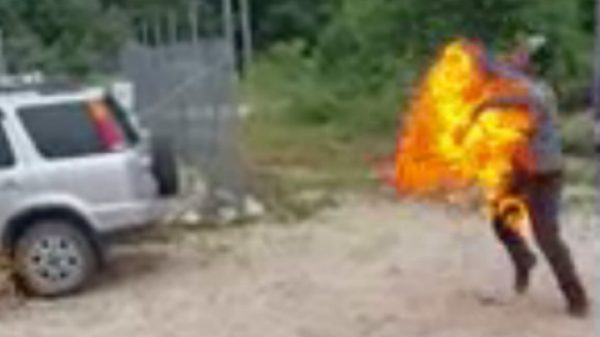 Pushed to breaking point after suffering three years of detention on Nauru island, a young Iranian migrant protested by setting himself on fire on Wednesday. The distressing scene was filmed by several other migrants. After being airlifted to Australia, he died in a hospital in Brisbane.

Hundreds of migrants, including around 40 children, are currently being held in a detention centre on Nauru. Most of them end up on the island after trying to reach Australia. However, under a controversial agreement in place between the Australian government and Nauru, migrants caught trying to make their way to Australia are often transferred directly to a detention centre in this tiny island state.

Following the visit of a team from the United Nations High Commissioner for Refugees (UNHCR) to the camp, 23-year-old Omid set himself on fire.

One of the videos currently making the rounds on social media networks shows the man lashing out at the UNHCR team as it left the camp.

He can be heard shouting (in Persian): “We’re sick and exhausted! You’ve destroyed our lives! Did you come just to gape at our misery? We lead miserable lives! You’ve been torturing us for three years!”

The young man then sets himself alight, before running and flailing his arms while screaming in pain. Later, several other migrants can be seen running towards him and smothering the flames with blankets. At the end of the video, the man can be seen lying face-down on the ground, with burns across large parts of his body.

On Thursday – before the young man passed away – Australian Immigration Minister Peter Dutton appeared determined to maintain his country’s firm stance on migrants. The Guardian Australia quotes him saying: “If anyone thinks that they can come and settle permanently in Australia by setting themselves on fire, I would say to them: it won’t happen.”

He also said that five other people had also tried to set themselves alight on Wednesday, adding that two Iranian women had been reported missing since Sunday, April 24.

For his part, the UNHCR’s Regional Representative, Thomas Albrecht, has underlined his concern for the migrants’ mental well-being. He has demanded that more be done to prevent a further deterioration of their mental health.

At the start of April, several dozen migrants staged a demonstration to remind Australian authorities that they had spent more than 1,000 days in the camp. Eyewitnesses reported that the protests led to injuries among several migrants as well as security guards.

It remains extremely difficult to know exactly what is going on inside the camp. For several months now, authorities have systematically denied international media outlets the right to report on the island.