‘Monstrous’ violence in Syria as government excludes Aleppo from truce 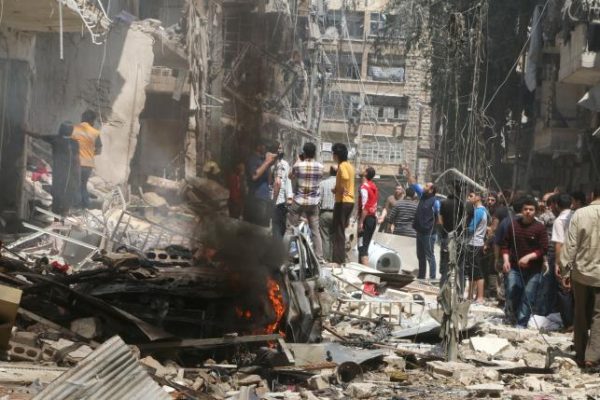 People inspect the damage at a site hit by airstrikes, in the rebel-held area of Aleppo’s Bustan al-Qasr, Syria April 28, 2016. REUTERS/Abdalrhman Ismail
Share:
Syria called local truces near Damascus and in a northern province on Friday but no halt to combat on the main battlefield in Aleppo, after a surge in fighting the United Nations said showed “monstrous disregard” for civilian lives.

A new “regime of calm” would begin from 1:00 a.m. on Saturday and last one day in the capital’s eastern Ghouta suburb and three days in the northern countryside of the coastal province of Latakia, the army said in a statement.

But by excluding the city of Aleppo, scene of the worst recent violence, the narrow truces were unlikely to resurrect a ceasefire and peace talks that have collapsed this week.

In the worst recent attack, an air strike destroyed a hospital in a rebel-held area overnight on Wednesday-Thursday. The French charity Medecins sans Frontieres, which supported the hospital, said on Friday the death toll had risen to at least 50, including six medics.

A Syrian military source said Aleppo was excluded from the newly announced truces “because in Aleppo there are terrorists who have not stopped hitting the city and its residents … There are a large number of martyrs in Aleppo which is why the situation is different there”.

Russia’s Interfax news agency quoted the officer in charge of a Russian ceasefire monitoring center as saying the truces meant all military action would cease in the covered areas.

Damascus described the truces as an attempt to salvage a wider “cessation of hostilities” agreement in place since February. That ceasefire, sponsored by Washington and Moscow, allowed peace talks to start but has all but completely collapsed in recent days along with the Geneva negotiations.

Violence was “soaring back to the levels we saw prior to the cessation of hostilities”, said the U.N. human rights chief, Zeid Ra’ad al-Hussein.

“There are deeply disturbing reports of military build-ups indicating preparations for a lethal escalation,” Zeid said in a statement that described a “monstrous disregard for civilian lives by all parties to the conflict”.

The United Nations has called on Moscow and Washington to help restore the ceasefire to prevent the collapse of peace talks, which broke up this week in Geneva with virtually no progress after the opposition walked out.

“The cessation of hostilities and the Geneva talks were the only game in town, and if they are abandoned now, I dread to think how much more horror we will see in Syria,” Zeid said.

Aleppo, Syria’s largest city before the war, has been divided for years between rebel and government zones. Full control would be the most important prize for President Bashar al-Assad, who has been fighting to keep hold of his country throughout a five-year civil war that U.N. mediator Staffan de Mistura says has killed up to 400,000 people.

Since Russia joined the war last year with air strikes against Assad’s enemies, battlefield momentum has shifted in the government’s favor.

Hundreds of thousands of people still live in rebel zones of Aleppo, and the countryside to the north includes the only stretch of the Turkish-Syrian border still in the hands of Assad’s main opponents, Arab Sunni Muslim rebel groups.

Opposition groups accuse the government of deliberately targeting civilians so they will abandon the area.

“The aim of what is happening in Aleppo now is to put pressure on us to accept the smallest demands and conditions proposed by Bashar al-Assad,” chief opposition negotiator Asaad al-Zoubi said in an interview with Al Jazeera television.

“The truce which they are talking about today is so the regime can prepare its forces again, especially because it failed to take control of Aleppo.”

The leader of the opposition High Negotiations Committee, Riyad Hijab, wrote to U.N. Secretary General Ban Ki-moon accusing the government of “horrifying daily massacres” and “the besiegement and starvation of cities, towns and villages”. He demanded the U.N. Security Council force Assad to stop.

Rebels have targeted government areas with aggressive shelling, which Damascus says is proof that they are receiving weapons from abroad.

Commenting on the hospital air strike, International Committee of the Red Cross spokesman Ewan Watson told Reuters in Geneva: “It is unacceptable … But it is up to an investigator and it is for a court to take that decision on whether it is a war crime or not.”

The Observatory said at least 11 civilians were killed on Friday in rebel areas and 13 in government areas. In the rebel-held zones, more were trapped under fallen buildings destroyed in helicopter strikes.

Bebars Mishal, a civil defense chief working in rebel-held areas of Aleppo, told Reuters there were a number of air attacks in the morning, many of them around mosques in rebel-held areas. Mishal said one hit a clinic in Aleppo’s Al-Marja district.

Syrian state media said a number of people had been killed and wounded and fires started during shelling of government-held quarters in Aleppo, which included a hit on a mosque as people were leaving Friday prayers.