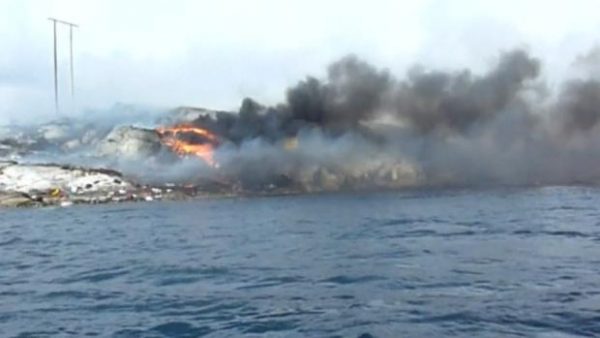 A helicopter ferrying passengers from a Norwegian oil platform crashed in the North Sea on Friday, apparently killing all 13 people on board, rescue officials said.

The 11 passengers and two crew on the flight from the Gullfaks B oil platform, operated by Norway’s Statoil (STL.OL), were all Norwegian except for one British and one Italian national, according to the Rescue Coordination Centre for Southern Norway.

“The helicopter is completely destroyed,” it said. After several hours searching for survivors, 11 bodies were found and the remaining two people were presumed dead.

Norway and Britain suspended commercial flights of the type of helicopter involved in the crash, an Airbus Helicopters H225 Super Puma, a workhorse of the offshore oil industry.

Airbus later said the grounding had been extended to the whole commercial fleet, 70 percent of which is used to support the global oil industry from the Gulf of Mexico to Asia and Africa.

Plumes of smoke rose from the scene in a stretch of sea with many small islands and debris could be seen on the rocks.

Several witnesses told Norwegian media they saw the rotor blades separating from the helicopter while still in the air.

“While I looked up, the rotor (blades) loosened and disappeared towards the north,” John Atle Sekkingstad told the website of local paper Bergens Tidende.

“After that, the helicopter turned north and I saw fire at the top of the helicopter, where the rotor had been attached. It caught fire before it crashed.”

The main body of the aircraft was lying under water, while its rotor was found on a rocky outcrop about 200 to 300 metres (220-330 yards) away, state broadcaster NRK said, quoting the rescue centre.

Oil worker Chris Andersen told NRK: “I saw the rotor separate … It was horrible. There was a huge explosion that you could physically feel. You felt the vibrations.”

The area, just west of Bergen, Norway’s second-largest city, has frequent helicopter traffic to and from offshore oil installations. Weather conditions on the day were normal.

Norway’s king and the prime minister expressed their condolences to the families of the victims.

“You are not alone in your sorrow,” Prime Minister Erna Solberg, dressed in black, said in an address to the nation.

“This is one of the worst accidents in Norwegian oil history,” said Arne Sigve Nylund, Statoil’s head of production in Norway, adding that the helicopter passengers worked for different companies, but were all on assignments for Statoil.

“This is a heavy day … Some of our colleagues will never come home,” he said in a trembling voice.

It was the second-worst Super Puma accident after a 2009 crash off Scotland in which the rotors also detached, killing 16 people. Investigators cited a catastrophic gearbox failure.

Formerly known as the Eurocopter EC225LP Super Puma, the aircraft is a long-range helicopter widely used in the oil and gas industry, as well as for VIP flights and search and rescue. Eurocopter changed its name to Airbus Helicopters in early 2014.

Imposing a temporary ban on commercial flights using the same type of helicopter, the Norwegian Civil Aviation Authority said it was too early to determine the cause of the crash.

Airbus Helicopters, a subsidiary of Airbus Group (AIR.PA), pledged full support for the investigation, which will be carried out by Norway with assistance from investigators based in France and Britain.

Norway said late on Friday it had found the two “black box” flight recorders, one capturing data and the other recording cockpit conversations, and would send them to Britain, which has experience of handling several recent helicopter incidents.

The crash deals a blow to an offshore industry already suffering weak demand due to low oil prices and puts the Super Puma back in the spotlight after a series of problems in the UK.

In 2012, Super Puma fleets were grounded after a pair of controlled ditchings that were later linked to gearbox cracks, prompting Airbus Helicopters to carry out modifications.

In 2013, four people died when an earlier version of Super Puma ditched off the Shetland Islands, off northern Scotland, in an accident blamed on crew.

The last helicopter crash in the Norwegian oil industry, in 1997, involved a Super Puma in which 12 people died.

Airbus Helicopters said it had no information so far to link the latest crash to earlier accidents.

The helicopter that crashed on Friday had been granted extended flying hours, or delayed maintenance, twice in 2015, an aviation authority official told Norwegian daily VG.

“The main gearbox in the aircraft in question, which has at all times been fully airworthy and compliant, was subsequently replaced in January 2016,” said CHC’s head of safety and quality, Duncan Trapp, in an emailed statement.