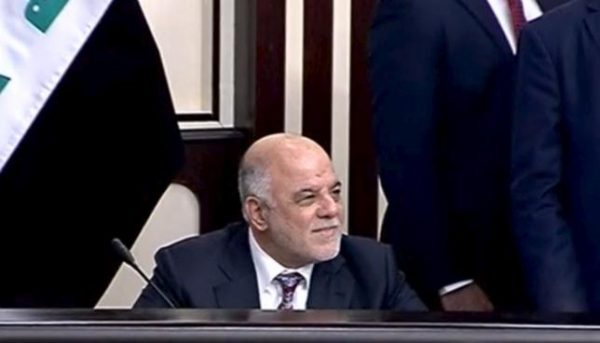 A dozen lawmakers disrupted the Iraqi parliament’s session on Tuesday, clapping, slamming their hands on desks and chanting slogans, forcing nearly two hundred other deputies to leave the main chamber to vote on a cabinet reshuffle.

Prime Minister Haider al-Abadi wants to replace some ministers – chosen to balance Iraq’s divisions along party, ethnic and sectarian lines – with technocrats. He has warned that any delay to the vote could hamper the war against Islamic State, which controls vast swathes of north and west Iraq.

Dissenting MPs have managed to block parliamentary sessions for two weeks by holding a sit-in in and around the building. They argued that Tuesday’s session was unconstitutional and may still challenge the reshuffle first mooted by Abadi in February.

On Tuesday, about 180 of 328 deputies moved to a separate hall after about an hour of chaos during which dissenting MPs chanted “invalid” and “treachery” and threw water bottles at Abadi. He was escorted out by security guards.

When they eventually voted, the lawmakers replaced six ministers with candidates first proposed by Abadi in March, before adjourning to vote on more cabinet changes on Thursday, according to state television. It cited its correspondent saying voting on the foreign minister was postponed after objections from the Kurdish alliance.

It was not clear if the sensitive portfolios of oil and finance were to be discussed. Both nominees had previously withdrawn their candidacies.

Reporters were evacuated from the building after unconfirmed reports that tens of thousands of protesters, mostly supporters of powerful Shi’ite Muslim cleric Moqtada al-Sadr, had breached the heavily fortified Green Zone housing parliament and foreign embassies to demand that the vote proceed.

Security sources denied any breach had occurred, but demonstrators were threatening to enter the Green Zone. A Reuters photographer saw protesters cross an initial barrier before being stopped by security forces.

The largely peaceful gathering was the biggest in the capital in weeks, with protesters filling a main road stretching nearly 2 km (1.3 miles) from Tahrir Square to the Green Zone.

Recent demonstrations have forced the government to bring back troops from front lines to secure the capital, according to security sources.

On Tuesday, protesters braving unseasonably hot weather waved Iraqi flags and chanted pro-Sadr slogans as they crossed a bridge over the Tigris River to reach the Green Zone’s gates.