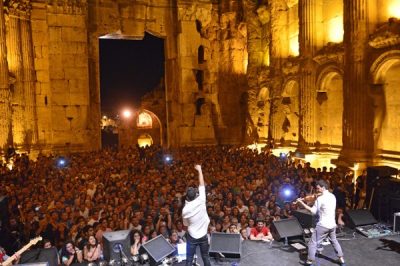 Mashrou’ Leila tell fans that authorities withdrew approval for gig and unofficially banned them from playing in Jordan again.

A Lebanese rock band have been banned from performing a concert in Jordan.

Mashrou’ Leila, a five-piece from Beirut, are known for their controversial lyrics covering topics such as homosexuality, gender equality, and political and religious freedom. They have been described as “the soundtrack to the Arab spring”.

The band were due to play a concert in Amman on 29 April – their last show in the Middle East before embarking on a North American tour – but in a statement posted on Facebook, they informed fans that authorisation for the concert had been withdrawn.

“The written justification officially provided is that the performance would have been at odds with what the ministry of tourism viewed as the ‘authenticity’ of the site, despite the fact that we had the chance to perform for you at the same specific site three times in the past and had followed the same permit procedure before the competent authorities,” they wrote.

“Informally, the story is much more problematic. We have been unofficially informed that the reason behind this sudden change of heart, [a] few days before the concert day, is the intervention of some authorities. Our understanding is that said authorities have pressured certain political figures and triggered a chain of events that ultimately ended with our authorisation being withdrawn.

“We also have been unofficially informed that we will never be allowed to play again anywhere in Jordan due to our political and religious beliefs, and endorsement of gender equality and sexual freedom.”

our official statement regarding the cancellation and ban of our upcoming show in Amman. please read and share. https://t.co/iyjpwBoikS