Jumblatt urges Hezbollah chief to back a compromise for presidential election 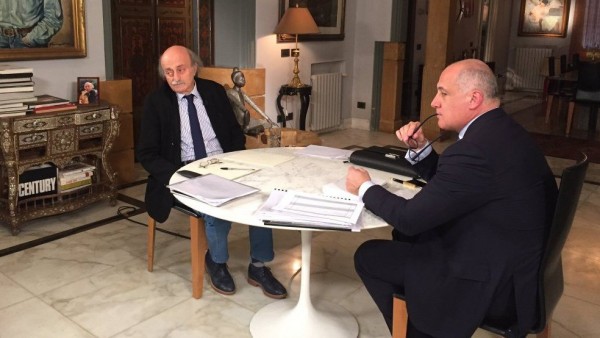 “Sayyed Nasrallah is a partner in Iran’s central decision in Syria, Iraq and Yemen. I send him this message today: Let’s reach a compromise on presidential elections that takes into consideration the principles you want, which protect Lebanon,” Jumblatt said.

“Hezbollah should strike a deal [to end the vacuum] for the sake of financial and economic stability in Lebanon,” he said, adding that he was ready to meet Nasrallah for this purpose.

The Lebanese parliament failed again this week and for the 38th time in a row to elect a president to replace Michel Suleiman whose term ended on May 25 , 2014.

Speaker Nabih Berri a key ally of Hezbollah postponed the election to May 10, 2016

Hezbollah announced earlier this year that it would boycott electoral sessions until it receives guarantees that its ally, Aoun, is elected head of state.

Lebanese Forces leader Samir Geagea blamed Hezbollah last  Friday for the country’s problems and vowed to step up efforts to get the country out of the present situation.

Geagea who was the first to announce his candidacy decided to back Aoun in order end the current impasse , but Hezbollah and Iran , according to analysts do not want a president for Lebanon at this stage despite the fact that they have the votes to guarantee Aoun’s election.

He said that Mashnouk telephoned him after Hariri intervened to mediate following an exchange on Twitter in which each questioned the other’s integrity.

“He [Mashnouk] made a big deal out of it. I am not creating a problem with him, but I’m surprised that a simple tweet made him that angry and compelled him to cite an article about corruption,” Jumblatt said.

Jumblatt urged the minister “to cool his nerves.”

Mashnouk Tuesday engaged in a mud-slinging match with Jumblatt over corruption charges. However, a telephone call between Hariri and Jumblatt later that night put an end to the exchange.

Jumblatt touched on the Judicial Police dispute which triggered his clash with Mashnouk, lamenting the “tangled jurisdictions” between the agency and the Internal Security Forces’ Information Branch.

Jumblatt called for the separation of tasks and giving each ISF agency its righteous jurisdiction.

“If the head of the judicial police chief is corrupt then he will be held accountable,” Jumblatt said, referring to Brig. Gen. Naji al-Masri, who is affiliated with Jumblatt.

Commenting on the scandal of  illegal Internet in Lebanon, Jumblatt asked how the equipment used to establish the unlicensed network managed to enter Lebanon “without the knowledge of security forces and the Army.”

He said he was not convinced that the Army Intelligence was not aware.

“Yes, I am opening fire at some corrupt officials within the Army.”

Defense Minister Samir Moqbel has stressed that the military was not involved in importing illegal hardware.

Jumblatt also said during the interview that he would submit his resignation from Parliament in the next session.

“I am preparing for the end of my political career, but we should not lose hope and we should pave the way for others to take the reins in the country.” He said