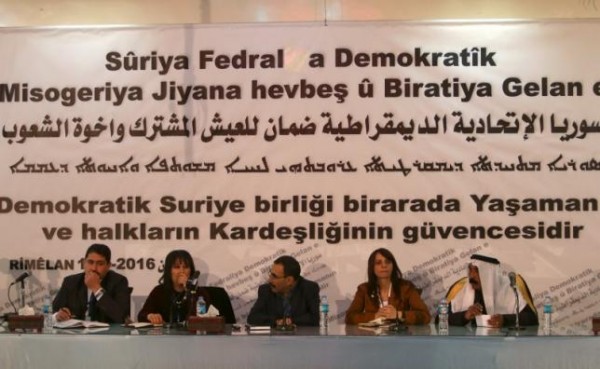 Syria’s Kurdish-controlled northern regions voted to seek autonomy under a federal system on Thursday, angering both the Damascus government and neighboring power Turkey with a move that could complicate new U.N.-backed peace talks.

The vote to unite three Kurdish-controlled provinces appears aimed at creating a self-run entity within Syria, a status that Kurds have enjoyed in neighboring Iraq since the fall of Saddam Hussein in 2003.

The proclamation is nevertheless an open challenge to many of the sides in Syria’s 5-year-old civil war, as well as their international sponsors, who have mainly been battling for control of what they say must remain a unified state and have dismissed any unilateral move toward federalism.

The Kurds, who enjoy U.S. military support, have beaten back Islamic State fighters to control swathes of northern Syria, but the main Syrian Kurdish party, the PYD, has so far been excluded from peace talks that began this week in Geneva.

Although Washington has backed the Kurds militarily, the State Department said it would not recognize “self-ruled, semi-autonomous zones in Syria”, although it might accept a federal structure if that were the choice of the Syrian people.

The three Kurdish-controlled regions agreed at a conference in Rmeilan in northeast Syria to establish the self-administered “federal democratic system of Rojava – Northern Syria”, officials announced. Rojava is the Kurdish name for north Syria.

Officials said at a news conference they intended to begin preparations for a federal system, including electing a joint leadership and a 31-member organizing committee which would prepare a “legal and political vision” for the system within six months.

Both the government of President Bashar al-Assad and Turkey, a regional heavyweight that is one of Assad’s strongest enemies, were swift to denounce the declaration.

“Any such announcement has no legal value and will not have any legal, political, social or economic impact as long as it does not reflect the will of the entire Syrian people,” state news agency SANA cited a foreign ministry source as saying.

The PYD has consistently said it wants a model of decentralized government for Syria, not partition. The document agreed on Thursday stressed that the federal system would “guarantee the unity of Syrian territory”.

An official in Turkey said: “Syria must remain as one without being weakened and the Syrian people must decide on its future in agreement and with a constitution. Every unilateral initiative will harm Syria’s unity.”

Turkey fears growing Kurdish sway in Syria is fuelling separatism among its own minority Kurds, and considers the main Syrian Kurdish militia to be an ally of the PKK, which has fought an insurgency for Kurdish autonomy in southeast Turkey.

Nawaf Khalil, a former PYD official, played down parallels between Kurdish aspirations in Syria and Iraq, saying Thursday’s announcement was a joint move taken together with the region’s other communities.

“The experience resulted from discussions with Arabs and Assyrians, Chechens, Armenians, Turkmen. There is a special case in Rojava, it is not like the path taken in Iraq,” he said.

A document seen by Reuters which was issued at the meeting said the aim was to “establish democratic self-administered regions which run and organize themselves … in the fields of economy, society, security, healthcare, education, defense and culture.”

Voting on the federal model had been expected on Wednesday but was delayed by one day, in part because of demands from Arab and Assyrian communities for reassurances that it would not mean separation from Syria, according to the British-based Syrian Observatory for Human Rights monitoring group.

Syrian Kurds effectively control an uninterrupted stretch of 400 km (250 miles) along the Syrian-Turkish border from the Euphrates river to the frontier with Iraq. They also hold a separate section of the northwestern border in the Afrin area.

The areas are separated by roughly 100 km (60 miles) of territory, much of it still held by Islamic State.

A U.S.-backed force which includes Kurdish YPG fighters has been battling Islamic State and other militants, making some gains in Raqqa, Hasaka and Aleppo provinces. Kurdish official Idris Nassan said those “liberated” areas were included in Thursday’s agreement.

Thursday’s document said the political system would represent all ethnic groups living in the area.

On Saturday, Syria’s government in Damascus ruled out the idea of a federal system for the country, just days after a Russian official said that could be a possible model.

President Vladimir Putin, who has announced the withdrawal of most Russian forces, said on Thursday Moscow’s intervention had created the conditions for Syria’s peace process.

The United Nations Syria envoy Staffan de Mistura, who is convening the peace talks in Geneva, suggested last week that a federal model for Syria could be discussed during negotiations.

“All Syrians have rejected division (of Syria) and federalism can be discussed at the negotiations,” he told Al Jazeera television.