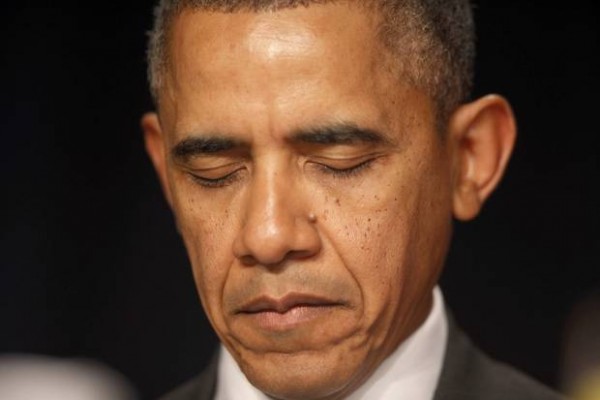 President Barack Obama closed his eyes as a prayer was offered at the National Prayer Breakfast in Washington on Thursday morning.
Share:

Kuwait is not a “free-rider” in U.S.-led campaigns against terrorism and other threats, a senior Kuwaiti security official said on Thursday, rejecting comments by President Barack Obama critical of some U.S. allies.

Sheikh Thamer al-Sabah, President of Kuwait’s National Security Bureau, was referring to Obama’s remarks to The Atlantic magazine last week in which he said some states in the Gulf and Europe were “free-riders” who called for U.S. action without getting involved themselves.

In an interview, Sheikh Thamer said Kuwait, like fellow Gulf state Qatar, had opened up air bases and airspace for the U.S.-led coalition bombing Islamic State in Syria and Iraq. Aircraft from other Gulf countries had carried out sorties, said Sheikh Thamer, a member of Kuwait’s ruling family.

“I am just wondering what a free ride is when we do all of these things,” he said, referring to Kuwait’s role.

“When we share intelligence, when we open our air, land and sea, when we spend billions of dollars in trying to combat terrorism and trying to help the Syrian refugees, how is it free?” he added.

“I actually looked up ‘free ride’ in the dictionary and I would like other people to know what a free ride is and see what we are doing here in this part of the world, especially when he mentioned the Gulf.”

Sheikh Thamer’s comments were unusually critical of the United States for a Kuwaiti official. They echo those on Monday by Saudi Arabia

Kuwait, which borders Iraq and Saudi Arabia and lies across the Gulf from Iran, is working to combat the threat of attacks by Sunni Islamist militants like Islamic State on its own soil, Sheikh Thamer said, as well as Iranian-backed operatives.

In June last year a Saudi suicide bomber blew himself up at a Shi’ite mosque in Kuwait, killing 27, in an attack claimed by Islamic State.

The bomber was previously unknown to authorities in Kuwait, Saudi Arabia or Bahrain, where he had been in transit, Sheikh Thamer said.

“He wasn’t under their radar, they didn’t know him. He was radicalised, to our understanding, through either the internet or through people he might have known,” he said.

“This is something that is very serious for us, if you don’t know the person, how can you defend yourself or how can you protect yourself?”

He said countries from the six-nation Gulf Cooperation Council had been compiling blacklists of suspected militants and shared them with Western allies.

He said Tehran’s nuclear deal with world powers had not diminished Kuwait’s concerns over Iran.

These included militant sleeper cells and spies, involvement in regional conflicts and the safety of the Bushehr nuclear power plant. Kuwait is the closest major population centre to it.

“The security issue from Iran was always there and I think will always continue. It is not something new,” he said.

“I salute you for trying your best to work with Iran only on their nuclear programme despite knowing what Iran is doing for Hezbollah in Lebanon, for other places in the world, for bombings, for hijacking of aircraft, for assassinations of people,” he added.

“I salute them on how they can actually sit down and talk about only the nuclear programme with the knowledge they have of how Iran is capable of doing all of these things. I can’t do it.”

He voiced concern about Iraq, where Iranian-backed Shi’ite militias are fighting alongside government forces against Islamic State.

“We are living in a very hot spot in the world,” he said.

Similarly Saudi Arabia’s Prince Turki al-Faisal, a former intelligence chief and ex-ambassador to Washington and London said Tuesday that the American leader had “thrown us a curve ball” in criticising Riyadh’s regional role.

“No, Mr Obama. We are not ‘free riders’,” Prince Turki , wrote in an open letter carried by the local Arab News English-language daily.

Prince Turki listed Riyadh’s support for Syrian rebels fighting the Islamic State group, its humanitarian aid for refugees in the region and its creation of an Islamic anti-terrorism coalition.

Ties between old allies the United States and Saudi Arabia, the top oil exporter, have been bumpy since the 2011 Arab uprisings .
Riyadh has since watched in alarm as Obama forged a deal with its top regional foe Iran over its nuclear program and as he declined to use air strikes against Syrian President Bashar al-Assad, Tehran’s ally, after a poison gas attack in Damascus.

Although Prince Turki does not presently hold any official position in the Saudi leadership, his views are described by insiders as often reflecting those of the kingdom’s top princes and as influential in Riyadh foreign policy circles.

In his letter, Turki asked whether Obama had “pivoted to Iran so much you equate the kingdom’s 80 years of constant friendship with America to an Iranian leadership that continues to describe America as the biggest enemy, that continues to arm, fund and support sectarian militias in the Arab and Muslim world”.
Reuters