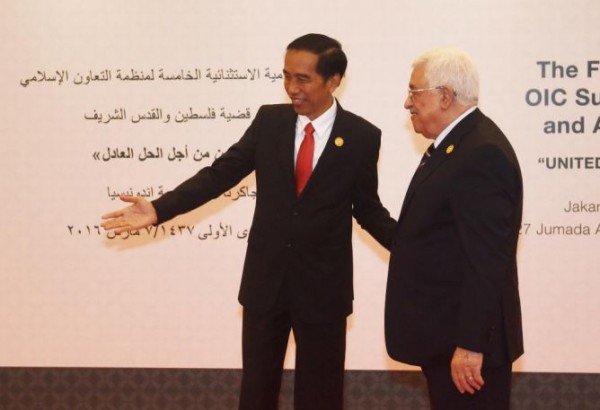 Indonesia is ready to take “concrete steps” to end Israel’s “colonization of Palestine,” Indonesian President Joko Widodo said Monday in opening remarks during a special summit of the Organization of Islamic Cooperation (OIC) in Jakarta. Indonesia is one of the few countries that do not recognize Israel as a nation.

“As part of the international community, Israel must immediately stop its illegal activities and policies in occupied territories,” Widodo reportedly said. “As long as the independence of the Palestinians has not been handed over to the Palestinians, Indonesia will stand against the Israeli occupation.”

The two-day OIC summit, organized at the request of the Palestinian Authority, is being attended by representatives from 57 nations. Additionally, the Middle East quartet — the United Nations, Russia, the United States and the European Union — are also present at the meeting.

The Israel-Palestine conflict centers around disagreements over what regions should be included within the borders of a future independent Palestinian state, and the fate of Jerusalem and Jewish settlements in the West Bank. While the Palestinian government insists that the West Bank territories are part of its proposed state, the region has been occupied by Israel since the Six-Day War — in direct contravention of the United Nations Resolution 242 that calls for the withdrawal of the Israeli military.