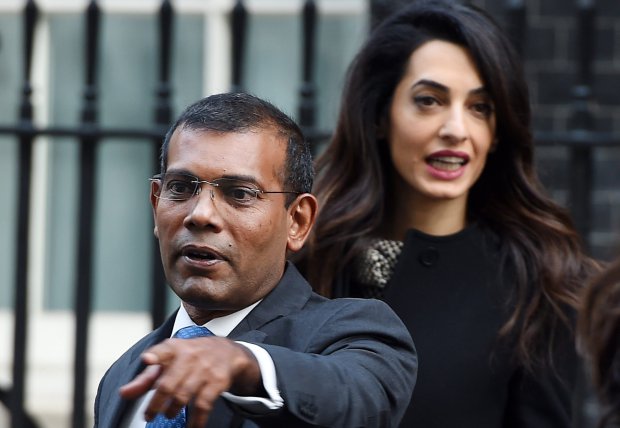 George Clooney has reportedly stepped up security surrounding him and his wife Amal Clooney after she began receiving death threats.

The international human rights lawyer is currently representing jailed former president of the Maldives, Mohamed Nasheed, and it is thought that the 38-year-old now has full-time security after receiving the worrying messages, even when she visits local restaurants just 300 yards from her house.

South Oxfordshire district councillor Paul Harrison has been involved in George’s plans to up his security following the risk. He’s also been in negotiations with George and the village after George’s plans to put up cameras, which could face any direction including into neighbouring properties, on varying poles around his Grade II listed Berkshire home were denied.

‘Security isn’t so much for him but for her,’ said district councillor Harrison
‘From George’s point of view, the high-level legal work she does and the death threats she gets, it’s quite serious.’

The cameras were rejected after they were considered a ‘potential infringement of the privacy of neighbouring properties’ but Mr. Harrison added that they ‘have now been reduced from six to three meters, so we’re happy with that’.

Earlier in the year Amal met with David Cameron to call for continued pressure against the Maldivian regime, which has left the former president at risk of arrest if he returns.

Nasheed was the country’s first democratically-elected president in 2008 however he claims that he was ousted at gunpoint in 2012. He was later jailed for 13 years last year under anti-terror laws but was given leave to visit the UK for spinal surgery early in 2016.