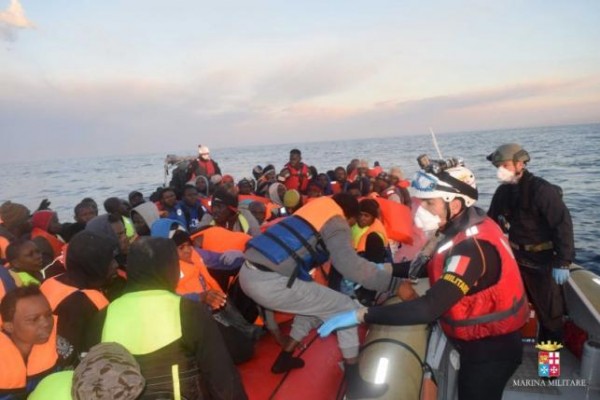 Migrants climb aboard a lifeboat during a rescue operation of 219 migrants by Italian naval vessel Bettica (not seen) in this February 23, 2016 handout photo provided by Marina Militare. REUTERS/Marina Militare/Handout via Reuters
Share:

More than 700 migrants were rescued from six leaky boats in the sea between Tunisia and Sicily on Tuesday and four were found dead, the Italian navy said.

Over 400 migrants have died in the Mediterranean this year, as people continue to try to cross into Europe despite bad winter weather in the second year of Europe’s biggest migration crisis since World War Two.

More than 110,000 people, many fleeing poverty and war in Africa and the Middle East, have arrived in Greece and Italy this year, a sharp increase on 2015, according to the International Organization for Migration (IOM).

The navy said one of its ships went to help three boats, recovering 403 survivors and the four bodies. Another ship rescued 219 people from two vessels and a third coordinated the rescue of 105 migrants from their sinking boat.

The navy did not say what nationality the migrants were nor did it give any other information about their identities.

Bad weather cut the number of people arriving last month in Greece, the main gateway to Europe for migrants, but the number was still nearly 40 times higher than in the previous January, European Union border agency Frontex says.

Most of those were from Syria, Iraq and Afghanistan, while most of those who entered Europe via Italy were Nigerian, according to Frontex.

Italy called on Monday for shared funding, including through issuing EU bonds, for a common policy to manage external borders and cope with the migration crisis.