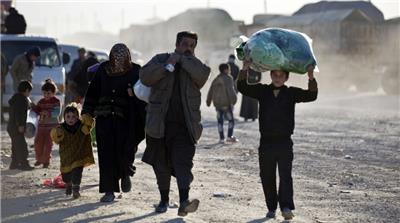 Hundreds of thousands of civilians could be cut off from food if Syrian government forces encircle rebel-held parts of Aleppo, the United Nations said on Tuesday, warning of a massive new flight of refugees from a Russian-backed assault.

Syrian government forces, backed by Russian air strikes and Iranian and Lebanese Hezbollah fighters, have launched a major offensive in the countryside around Aleppo, which has been divided between government and rebel control for years.

The assault to surround Aleppo, once Syria’s biggest city with 2 million people, amounts to one of the most important shifts of momentum in the five year civil war that has killed 250,000 people and already driven 11 million from their homes.

Since last week, fighting has already wrecked the first attempt at peace talks for two years and led rebel fighters to speak about losing their northern power base altogether.

The United Nations is worried the government advance could cut off the last link for civilians in rebel-held parts of Aleppo with the main Turkish border crossing, which has long served as the lifeline for insurgent-controlled territory.

“It would leave up to 300,000 people, still residing in the city, cut off from humanitarian aid unless cross-line access could be negotiated,” the United Nations Office for Coordination of Humanitarian Affairs said in an urgent bulletin.

If government advances around the city continue, it said, “local councils in the city estimate that some 100,000 – 150,000 civilians may flee”.

Turkey, already home to 2.5 million Syrians, the world’s biggest refugee population, has so far kept its frontier mostly closed to the latest wave of displaced, making it more difficult to reach them with urgently needed aid. The United Nations urged Ankara on Tuesday to open the border and has called on other countries to assist Turkey with aid.

Foreign Minister Mevlut Cavusoglu said as many as a million refugees could arrive if the Russian-Syrian campaign continues. Fifty thousand people had reached Turkey’s borders in the latest wave, Ankara had admitted 10,000 so far and would allow in others in a “controlled fashion”, he said.

The U.N. World Food Programme said in a statement it had begun food distribution in the Syrian town of Azaz near the Turkish border for the new wave of displaced people.

“The situation is quite volatile and fluid in northern Aleppo with families on the move seeking safety,” said Jakob Kern, WFP’s country director in Syria.

“We are extremely concerned as access and supply routes from the north to eastern Aleppo city and surrounding areas are now cut off, but we are making every effort to get enough food in place for all those in need, bringing it in through the remaining open border crossing point from Turkey.”

The Russian-backed government assault around Aleppo, as well as advances further south, helped torpedo the first peace talks for nearly two years, which collapsed last week before they got under way in earnest.

International powers are due to meet on Thursday in Munich in a bid to resurrect the talks, but diplomats hold out virtually no hope for negotiations as long as the Russian-backed government offensive is under way at full bore. Rebels say they will not attend without a halt to bombing.

Moscow turned the momentum in the war in favor of its ally President Bashar al-Assad when it joined the conflict four months ago with a campaign of air strikes against his enemies, many of whom are supported by Arab states, Turkey and the West.

German Chancellor Angela Merkel accused Russia this week of bombing civilians, against a U.N. Security Council resolution Moscow signed up to in December. Russia says it is targeting only Islamist militants. Kremlin spokesman Dmitry Peskov said there was no credible evidence of civilian deaths.

The complex multi-sided civil war has drawn in outside powers, with the United States leading a separate campaign of air strikes against Islamic State militants who control eastern Syria and northern Iraq.

A suicide bomber drove his car into a police officers’ club in a residential quarter in central Damascus on Tuesday, blowing himself up and killing several people, a Syrian interior ministry statement said.

The Syrian Observatory for Human Rights, which monitors violence in the war, said eight police officers were killed and 20 wounded in the blast. Islamic State said it was responsible.