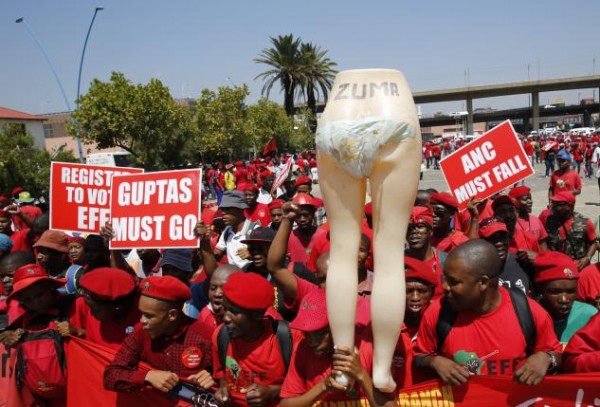 South African opposition parties on Tuesday asked the country’s top court to rule on whether President Jacob Zuma broke the law by spending 250 million rand (then $23 million) on a state-funded security upgrade to his home.

The constitutional court will decide in the next few days if it will hear a case to decide whether a report from South Africa’s anti-graft authority, accusing Zuma of misusing state funds, was legally binding.

The 2014 report from the public protector said that Zuma had personally benefited from some of the refurbishments to his country home in Nkandla, which included a cattle enclosure, swimming pool and amphitheatre.

After months of denying any wrongdoing, Zuma said last week that he would pay back money spent on improvements that did not relate to security and asked the auditor general and finance minister to decide an appropriate figure.

They are hoping that a case in the constitutional court will put pressure on Zuma and the ruling African National Congress (ANC) ahead of municipal elections this year and help them win control of some cities, including the capital Pretoria.

Thousands of EFF members, led by former ANC youth league leader Julius Malema, were expected to march on Tuesday to the constitutional court to protest against Zuma’s leadership.

With a sharp economic slowdown causing widespread hardship, Zuma has faced mounting criticism of his leadership since he secured a second term in office in 2014.

“The only acceptable solution for us is if Zuma resigns,” said EFF-member Alpheus Mogashoa, dancing and singing with crowds of anti-Zuma campaigners outside the court.

“Zuma is the problem with South Africa.”