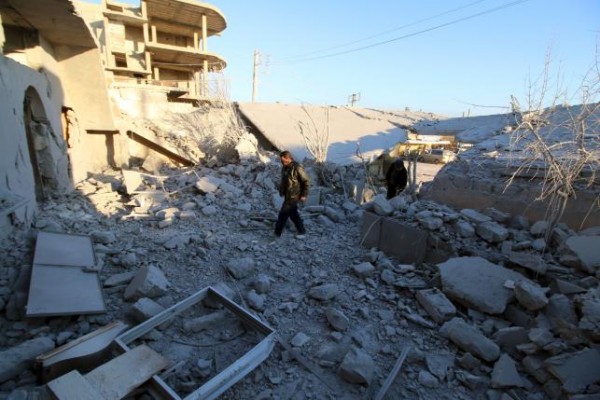 Residents inspect damage after airstrikes by pro-Syrian government forces in Anadan city, about 10 kilometers away from the towns of Nubul and Zahraa, Northern Aleppo countryside, Syria February 3, 2016. REUTERS/Abdalrhman Ismail
Share:

A United Nations envoy halted his attempts to launch Syrian peace talks on Wednesday after the army, backed by Russian air strikes, made a major advance against rebel forces north of Aleppo, choking opposition supply lines from Turkey to the city.

In what rebels called a punishing assault, the government forces ended a three and a half year siege of the Shi’ite towns of Nubul and al-Zahraa, a key step in a wider campaign to recapture all of Aleppo, Syria’s biggest city before the war.

The government’s territorial breakthrough came after hundreds of bombing raids by Russian warplanes. The U.N. said it had been told hundreds of families had been uprooted following “an unprecedented frequency of air strikes in the past two days”. Three aid workers were among the dead.

U.N. envoy Staffan de Mistura announced a three-week pause in the Geneva talks, the first attempt to negotiate an end to Syria’s war in two years. He had formally opened them on Friday but both sides denied they had ever begun.

“I have indicated from the first day that I won’t talk for the sake of talking,” the envoy told reporters, saying he needed immediate help from international backers led by the United States and Russia, which are supporting opposite sides of a war that has also drawn in regional powers.

Aleppo factions, reeling from the assault, told the opposition delegation late on Tuesday they would bring down the negotiations within three days unless the offensive ended, a source close to the talks said.

De Mistura has described this attempt to negotiate an end to a war that has killed 250,000 people, driven millions from their homes and empowered Islamic State, as Syria’s last hope.

“I have concluded frankly that after the first week of preparatory talks there is more work to be done, not only by us but by the stakeholders,” he said after meeting the opposition delegation led by newly-arrived coordinator Riad Hijab, who diplomats say is a unifying figure for the disparate rebel side.

NO END TO RUSSIAN STRIKES

Aleppo, 50 km south of the Turkish border, was Syria’s most populous city before the country’s descent into civil war. It has been partitioned into zones of government and insurgent control since 2012.

If the government regains control, it would be a big blow to insurgent’s hopes of toppling President Bashar al-Assad after nearly five years of bloody conflict that has seen a de facto partition between western areas still governed from Damascus and the rest of the country run by a patchwork of rebels.

The Levant Front rebel group said the breaking of the sieges of the Aleppo villages of Nubul and Zahraa came only after “more than 500 raids by Russian airplanes”.

One commander said opposition-held areas of the divided city were at risk of being encircled entirely by the government and allied militia, and appealed to foreign states that back the rebels to send more weapons.

“How can you … enter negotiations when you have unprecedented military pressure?” a senior Western diplomat said. “The Russians and regime want to push the opposition out of Geneva so the opposition bears the responsibility for the failure.”

Russian Foreign Minister Sergei Lavrov said his country had no intention of ending its campaign.

“Russian strikes will not cease until we really defeat terrorist organisations like (The al Qaeda-linked) Jabhat al-Nusra. And I don’t see why these air strikes should be stopped,” he said at a news conference in Oman’s capital Muscat.

Diplomats and opposition members said they were taken by surprise when de Mistura called for immediate efforts to begin ceasefire negotiations despite there being no official talks or goodwill measures from the Syrian government.

The opposition has said it will not negotiate unless the government stops bombarding civilian areas, lifts blockades on besieged towns and releases detainees.

The Syrian Observatory for Human Rights, which monitors the violence in the country, said Russian and Syrian warplanes launched dozens of strikes on the rebel towns of Hayan and Hreitan in northern Aleppo on Wednesday.

“Less than 3 km separate the regime from cutting all routes to opposition-held Aleppo,” Rami Abdulrahman, director of the Observatory, said. “It did in three days what it failed to do in 3-1/2 years.”

A U.S. official in Geneva called for an end to “the daily bombing of civilians by Russian and regime aircraft”.

“We’re appalled that the regime seems to view humanitarian access as a topic for debate at the talks in Geneva,” the official said, stressing that UN Security Council Resolution 2254 already called for an immediate end to attacks on civilians.

Government delegation chief Bashar al-Ja’afari told Reuters earlier that the government was still unclear on who it would be negotiating with from the fragmented opposition.

“I couldn’t tell you much about what’s going on because we are waiting for Godot, and Godot hasn’t come yet,” he said, referring to Samuel Beckett’s never-resolved play “Waiting for Godot”.

When asked about opposition demands for the government to lift sieges and allow humanitarian convoys into cities, including the rebel-held town of Mouadamiya, Ja’afari said the government had regularly sent convoys to it and other cities.

On Sunday, the United Nations said Mouadamiya, a town of 45,000 on the southwest edge of Damascus, faced a new siege by government forces.

Senior Syrian opposition negotiator Mohamed Alloush, representing the major rebel group Jaish al-Islam (Islam Army), told Reuters it would be insufficient for the government to allow a convoy into the town.

“It’s a good step but it’s not enough and the problem is not in Mouadamiya. The problem is in 22 besieged cities,” he said.