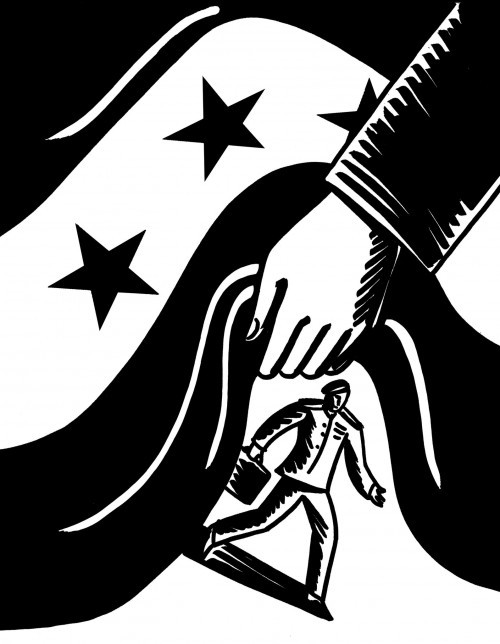 By: MOHAMMED ALAA GHANEM*
AS the fraught Syria peace talks inch forward in Geneva, the United States finds itself with little leverage to help negotiate an end to a conflict that has left over a quarter of a million people dead and helped fuel the worst refugee crisis since World War II.

But there’s an efficient way for Washington to put pressure on Damascus: Offer money and asylum to officers and officials who defect from the criminal regime of President Bashar al-Assad.

Discontent among Alawites — the minority sect that forms the regime’s core constituency — as well as Druse and other religious minorities is at its highest since 2012, when dozens of Mr. Assad’s senior military and security officials left the government. Last summer, simmering tensions reportedly boiled over when gun battles erupted between Iranian-backed regime forces and residents of two Alawite villages outside Hama. In September, Druse protesters and paramilitaries overtook a government building in the southern province of Sweida and even destroyed a statue of Hafez al-Assad, Mr. Assad’s father.

Over the course of the revolution, about 3,000 Syrian officers have jumped ship, according to a report by the Free Syrian Army. A vast majority now live in refugee camps in Turkey and Jordan, where they perform odd jobs or rely on host countries or the thinly stretched Syrian opposition for their daily bread. But not enough have left, largely because this enormous decline in quality of life discourages additional desertions, in particular from high-level generals who could help force a political solution. Money and legal assistance from the United States could change that.

I know firsthand that Mr. Assad’s deputies would take advantage of this fund. In 2012, an Assad official reached out to the Syrian community in Washington. The official was ready to switch sides and wanted help. This message was quickly forwarded to the State Department, which gave a surprising reply: Apply for a visa and follow the normal procedure. The aspiring defector decided to sit tight, deterred by the prospect of a lengthy and intensive application process that would undoubtedly blow the official’s cover.

Something similar happened a few months later. An influential Alawite officer wanted to find out whether the United States would support him if he abandoned his post. Although he was prepared to rally his network against Mr. Assad if he received assistance, Washington essentially ignored him.

To be fair, the Obama administration has secretly communicated with top Syrian officials for years to encourage them to switch sides. That outreach, however, has been limited to high-level contacts and has never included concrete incentives, according to former administration officials I spoke with. For that strategy to work, Washington must deliver substantial assistance to lower-ranking officers and officials.

The best way is for the C.I.A. to provide temporary asylum and two payments: a lump sum delivered to defectors immediately after they abandon Mr. Assad, and then a monthly salary of a few thousand dollars. This would be real money to Syrians, but mere pennies compared with the $3 billion Washington has spent on the anti-Islamic State campaign.

Obviously, the agency should vet all officers beforehand to verify they are indeed Syrian officials and not double agents. In exchange, defectors should be required to mobilize other members of their community to switch sides and work with opposition members on a political transition plan.

My Alawite contacts also stressed the need for secrecy. It’s doubly risky for those who still have family in Syria to abandon the regime, since their loved ones would most likely be targeted by Mr. Assad’s security forces. In fact, Mr. Assad fears defections so much so that his intelligence services closely monitor Army officers.

As part of any negotiation, Obama administration officials should say, with clarity and consistency, that Mr. Assad cannot stay in power. Secretary of State John Kerry’s recent conference with opposition leaders in Riyadh, Saudi Arabia, left them wondering if the United States even wants Mr. Assad to leave. Alawites were similarly confused last spring after the C.I.A. director, John O. Brennan, said no one “wants to see a collapse of the government.” Such confusion has real consequences in Syria.

Moreover, America’s current timeline, which gives Mr. Assad at least 13 months until his departure, wrongly signals to potential defectors that there is no hurry. But there should be a rush. If Washington persuades more officers and officials to switch sides, it could help precipitate the beginning of the end of the war.

Of course, support for defectors would not be a panacea. Russian military intervention in Syria has convinced many in the Alawite elite that Mr. Assad will never fall. And Iran has sent strong signals that it supports Alawites. As Mr. Assad suffered heavy losses last summer, the commander of the Islamic Revolutionary Guards Corps’ elite Quds Force, Maj. Gen. Qassim Suleimani, visited Alawite towns on the front lines in an ostentatious show of support. Such public displays make a difference as Syrians consider whether to abandon Mr. Assad or not. But so would help from Washington.

If Syrian minorities abandon Mr. Assad in greater numbers, the conflict would lose much of its dangerous sectarian tenor. And chances for a stable political transition would increase. Washington should improve the living conditions of former officers in refugee camps and offer concrete incentives to those who want to switch sides. Doing so would help the United States increase its leverage during the Geneva talks, and hasten Mr. Assad’s downfall.