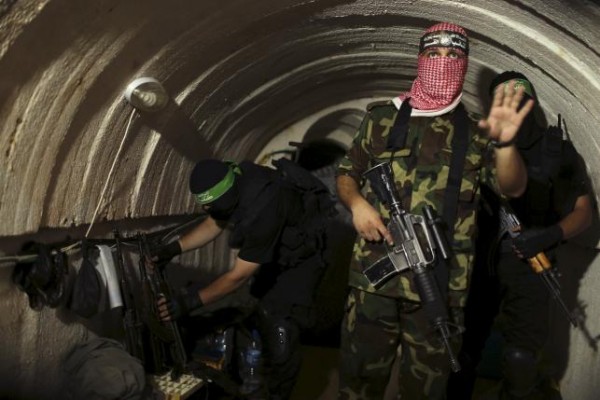 A Palestinian fighter from the Izz el-Deen al-Qassam Brigades, the armed wing of the Hamas movement, gestures inside an underground tunnel in Gaza in this August 18, 2014 file photo. REUTERS/Mohammed Salem/Files
Share:

Nissim Hakmon and his neighbors say they hear banging and clattering at night. They are convinced it can only mean one thing: Hamas is tunneling under their homes from Gaza and will one day emerge, guns blazing, to attack or kidnap them.

The Israeli government says its investigations have not come up with any evidence the night-time noises reported by villagers living near Gaza emanate from tunnels, but assertions by Hamas of extensive cross-border digging has only fueled concern.

“The fear among everyone here is constant,” Hakmon told Reuters in his village of Pri Gan, near the Gaza Strip. “I’ve heard the sound of a hammer and chisel and my neighbor says she can hear them digging under the cement. We’re stressed out.”

The Palestinian Islamist group which runs Gaza used tunnels running out of the strip to give its heavily outgunned fighters the advantage of surprise during its 2014 war with Israel.

Twelve soldiers were killed by Hamas tunnel raiders and one was kidnapped. No civilians have been targeted by the fighters, who describe the tunnels as a defensive tool in case of future conflict. But that is little reassurance to the villagers.

Underground infiltration by gunmen from Gaza “is something we know deep inside is just a matter of time, even though we tell the kids everything is okay,” Hakmon said.

Hakmon’s worry is being echoed by some others who live on the Gaza periphery, putting extra political pressure on Prime Minister Benjamin Netanyahu over his handling of the standoff with the Palestinian territory since the war in 2014.

Beset by a months-long surge of street attacks by Palestinians from the occupied West Bank and Jerusalem, Israel has little desire to see a fresh flare-up in Gaza, where Hamas has mostly held its fire in the past 18 months.

The movement announced last week it had rehabilitated cross-border tunnels destroyed during the war – a muscle-flexing message to Israel, its security partner Egypt and Palestinian President Mahmoud Abbas, the Islamists’ U.S.-backed rival.

“The resistance factions are in a state of ongoing preparation underground, above ground, on land and sea,” Hamas deputy leader Ismail Haniyeh said at a rally called to honor seven tunnelers who were killed in a cave-in on Tuesday.

Hamas has twice the number of tunnels as those used in the Vietnam war against U.S. forces, Haniyeh said – a tall order, but bold enough a claim to shore up the worries voiced in Pri Gan, 4 km (2 miles) away from the Gaza border, and elsewhere.

The residents’ alarm, amplified by local media, and calls for preemptive military action by opposition politicians, roused Netanyahu to warn Hamas on Sunday.

“Should we be attacked through Gaza Strip tunnels, we will take forceful action against Hamas, with far greater force than was used in Protective Edge,” he said, referring to the 2014 war, which killed more than 2,100 Palestinians, most civilians.

“We are working systematically and level-headedly against all threats, including the Hamas threat, through both defensive and offensive measures.”

Israel lost six civilians in the war as well as 67 soldiers.

Military engineers unearthed and destroyed 32 tunnels, Israeli officials say, and have since, with U.S. help, been developing a half-dozen technologies for detecting digs along the sandy, 65-km (40 mile) frontier with Gaza.

When those counter-measures might be ready is a closely guarded secret. Hamas, for its part, may be hoping to lay down as many new tunnels as possible before the system is in place.

“We are not asking for war, but getting ready for one should Israel launch it,” Hamas military spokesman Abu Ubaida said.

Israel’s refusal to elaborate on its anti-tunnel efforts has fanned fears in the 30-odd villages near the Gaza frontier.

Israeli Defence Minister Moshe Yaalon told Israel Radio on Monday that military experts “rush anywhere that someone claims to hear noises (but) those tests have not shown that the noise is from the digging of tunnels”.

The conservative government has found itself in the unfamiliar situation of preaching restraint after center-left opposition leader Isaac Herzog demanded any tunnels be bombed.

“What are the prime minister and defense minister waiting for? For terrorists to surface with guns drawn?” Herzog said.

Yaalon shot back that such discussions should be held behind closed doors, and argued that the passive build-up of an enemy’s capabilities did not necessarily warrant initiating hostilities.

“It might also be proposed that we go and attack (Lebanese guerrilla group) Hezbollah’s 100,000 rockets in the north or the hundreds of missiles that Iran has aimed at us,” Yaalon said.

Hakmon does not share the government’s equanimity, and says he and other Pri Gan residents are going around armed, locking their doors and shuttering their windows as a precaution.

“We are waiting for the army, or, God forbid, for the worst to happen,” he said.