No wine? No lunch for Iran’s president in France 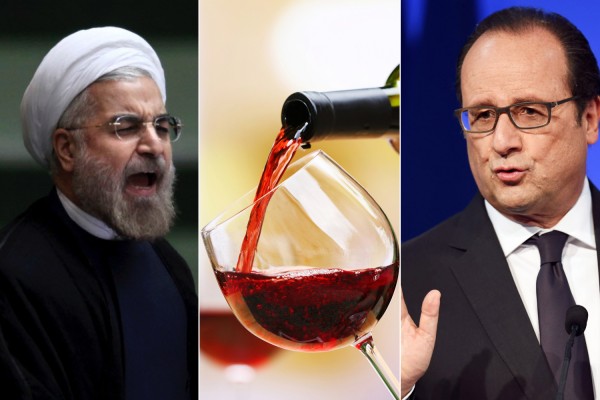 French President François Hollande decided having wine with lunch is more important than breaking bread with Iran’s President Hassan Rouhani during an official visit to Paris.

Hollande scrapped the lunch at the Élysée Palace after Rouhani asked for a halal menu in keeping with his Muslim faith, and that also meant no wine at the table during his first visit as president to the City of Light.

“It is not the halal which was a problem but the wine,” France’s ambassador to the United States, Gérard Araud, said on Twitter. “Nobody should constrain anybody to drink or not to drink.”

In Italy, where wine is just as much a part of the culinary routine as in France, officials submitted to the Iranian leader’s demands during a state dinner Monday. Italian officials also erected large boxes around ancient nude statues at Rome’s Campidoglio museum to protect the gaze of officials from the Islamic Republic from falling on artists’ renderings of the human form.

Renzi’s decision outraged critics on the left and right.

“Respect for other cultures cannot and must not mean negating our own,” said Luca Squeri, a lawmaker in former prime minister Silvio Berlusconi’s center-right Forza Italiaparty. “This isn’t respect, it’s canceling out differences and it’s a kind of surrender.”

And Rome City Councilman Gianluca Peciola of the Left, Ecology and Freedom party started an online petition demanding Renzi explain “a disgraceful decision which is a mortification of art and culture as universal values.”

Rouhani is touring Europe to drum up business following the lifting of international sanctions in line with the historic nuclear deal he secured in July with world powers. It is the first such tour by an Iranian president in almost two decades.