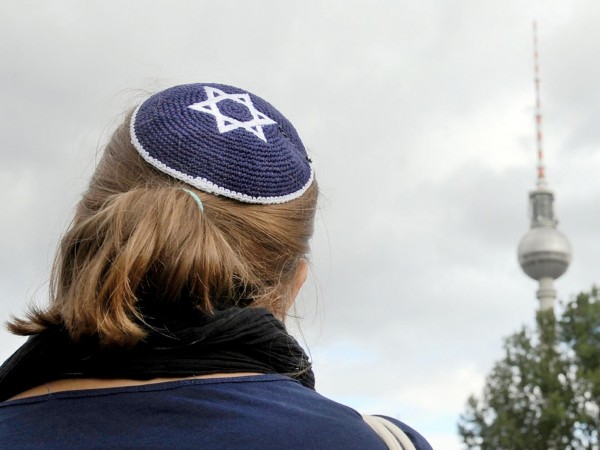 A German Jewish woman wears a kippah in Berlin AFP/Getty Images
Share:
When Judith G. helped out at a refugee center near Frankfurt last October and identified herself as Jewish, she was spat on and insulted.

German Jews say the case of Judith G., a 33-year-old optician who asked not to be fully named, isn’t isolated and underlines concerns many have about the record arrivals of asylum seekers, largely from Muslim countries in the Middle East.

Official figures show German-born far-right supporters commit the vast majority of antisemitic crimes in the country, and Muslim leaders say nearly all asylum seekers – who can be targets of hate crime themselves – are trying to escape conflict, not stir it up.

Nevertheless, Jews across Germany are hiding their identity when volunteering at refugee shelters for fear of reprisals, adding another layer of complexity to a social, economic and logistical challenge that is stretching the fabric of German society.

“Among the refugees, there are a great many people who grew up with hostility toward Israel and conflate these prejudices with hatred toward Jews in general,” Josef Schuster, president of the Central Council of Jews, told Reuters in an interview conducted in October.

Chancellor Angela Merkel stressed last week that antisemitic attitudes among some young people arriving from countries where “hatred toward Israel and Jews is commonplace” needed to be dealt with.

The safety of Jewish communities is particularly sensitive in Germany due to the murder of over 6 million Jews by Hitler’s Third Reich, which is marked on Wednesday by the international Holocaust Memorial Day. Today, the German Jewish community numbers around 100,500.

According to a 2013 study by the EU Agency for Fundamental Rights, 64 percent of German Jews avoid the public display of symbols that would identify them as Jewish. It also found that only 28 percent of them report antisemitic incidents.

Such incidents, as recorded by the Interior Ministry, dropped in 2015 but Jews still remember chants by young Muslims proclaiming “Jews to the gas” on German streets in protests against the 2014 Israeli-Palestinian Gaza War.

Concerns rose earlier this year when two suspected asylum seekers from Syria and Afghanistan attacked and robbed a man wearing a skullcap on the northern island of Fehmarn, a crime the local prosecutor treats as antisemitic.

“We don’t approach the issue of refugees with negative expectations in general,” said Walter Blender, head of the Jewish community in Bad Segeberg, a town on the mainland about 100 km (60 miles) from Fehmarn. “But we are very worried and skeptical, and anecdotal evidence so far showed that we have reason to be scared.”

Preliminary Interior Ministry figures show that far-right supporters were responsible for well over 90 percent of the antisemitic crimes recorded last year up to the end of November. People with a foreign background were blamed for little more than four percent, although this category does not reveal their country of origin or immigration status.

Starting from this month, however, the ministry will produce a breakdown that includes a refugee category.

“The vast majority of people coming here are fleeing war and terror themselves,” said Aiman Mazyek, president of Germany’s Central Council of Muslims. “All they want is peace and quiet.”

There is little research on the scale of antisemitism in Arab countries, but a Pew poll from 2011 shows a large majority of people there hold unfavorable opinions of Jews.

Researchers say too little effort is put into teaching Western and German values to asylum seekers, including the country’s relationship with Jewish communities.

“There is a lack of a deeper understanding of the culture in many Middle Eastern countries and this results in Western stakeholders being taken by surprise over the fervent antisemitism there,” said Wolfgang Bock, an expert in Islamism and Middle Eastern politics.

In Germany, refugees with recognized asylum claims learn about the country’s history and values alongside language tuition. But some experts say there is nothing about contemporary political issues, such as relations with Israel.

“Education can’t just be about the Holocaust and the Third Reich. Schools also need to talk about the Middle East conflict, antisemitism based on religious argumentation and conspiracy theories,” said Ahmad Mansour, an Arab-Israeli researcher with the European Foundation of Democracy.

But communities across Germany are overwhelmed with processing the hundreds of thousands of asylum applications and are struggling to provide shelter and food to the arrivals.

Some Jewish groups, such as the Berlin-based “Friends of the Fraenkleufer Synagogue”, have taken the cultural exchange issue into their own hands with around 40 volunteers helping out at a local refugee center.

“We want to send a message to all the Jews who sit at home and build big fences around their synagogues that it’s possible and necessary to approach one another, because if we don’t try, things can only turn for the worse,” said Nina Peretz, head of the initiative.